The Rejection of Dependency: Popular Mobilization in Haiti 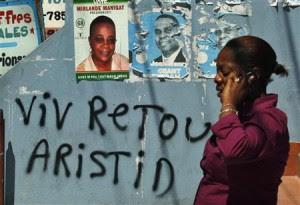 The Rejection of Dependency: Popular Mobilization in Haiti

The people of Haiti continue to struggle against rigged elections, systemic human rights abuses, foreign occupation and an NGO led development model which has fallen flat in regards to reconstruction and relief efforts.

At the same time there has been many signs of popular mobilization articulating that the Haitian people are fed up and will not stand idly by with the international community’s attempt to install a puppet government and continue a deeply flawed and self serving reconstruction program.

The March 20th presidential elections were an attempt by the international community to give some legitimacy to an electoral process that had been widely discredited and tarnished by massive fraud and the exclusion of 15 political parties. The election, popularly referred to as a selection, had been between two right wing candidates attempting to portray themselves as “the people’s choice”. The voter turnout proved that they are anything but. Haiti Liberté has reported that the voter turnout for the March 20th elections was at a paltry 17.7%, evidence of a popular boycott. Similarly, the first round of elections held on November 28th only managed to draw out 23% of the population – a record low for both Haiti, and all of Latin America, since record keeping began 60 years ago.

Much to the dismay of the two presidential candidates, the electoral masquerade was largely overshadowed by the return of former president, Jean Bertrand Aristide – who had spent the past seven years in exile due to a coup d’etat orchestrated by the United States, Canada, France and the Haitian elite. Recently released cables via Wikileaks revealed that the United States and Brazilian governments feared that the return of Aristide to Haiti would threaten the emergence of popular democracy, stating that “all efforts must be made to keep Aristide from returning to Haiti or influencing the political process”.

Upon his return, Aristide condemned the exclusion of the country’s most popular political party, Fanmi Lavalas. Maryse Narcisse, the spokesperson for Fanmi Lavalas called for a general boycott of the elections – and from all appearances the Haitian people listened. The reason for the continuing popularity of Fanmi Lavalas and Aristide is that they refused to bow to the pressure of the Haitian elite and the international community. Aristide and Lavalas did the unthinkable; they called upon the Haitian elite to pay their taxes, refused further privatization of the Haitian state, invested in public health and education and called for a $5 daily minimum wage.

Aristide’s return is widely seen as a victory for popular grassroots movements. Yves Pierre Louis of Haiti Liberté stated that “Aristide’s presence alone will be like a serum. It will revitalize the popular movement and the struggle against occupation and neo-liberalism.” In response to the horrific conditions in the tent camps and failed relief efforts, the vast number of problems has led to a revitalized popular mobilization against human rights abuses, foreign occupation and a reconstruction process which has marginalized both the voices and rights of the Haitian people.

On March 24th, the Institute for Justice and Democracy in Haiti released a damning report which highlighted the role of the United Nations Stabilization Mission in Haiti (MINUSTAH) in committing human rights abuses. The “peacekeeping” force has been routinely accused of engaging in sexual abuse and exploitation, introducing cholera into Haiti, and engaging in extrajudicial killings. Grassroots organizations such as the popular community media collective Bri Kouri Nouvel Gaye have been instrumental in spreading the news to the Haitian people and mobilizing them to become educated about their rights.

On April 1st, 40 popular Haitian organizations called for the dissolution of the Haiti Interim Reconstruction Committee (HIRC), the organization in charge of “building Haiti back better”. The reason for their statement is that after more than a year of promised reconstruction and billions of dollars pledged, “nothing significant has really been undertaken”. The organizations go on to state that “Our analysis and evidence leads us to conclude that Haitian society continues to be locked into the same traps of exclusion, dependency, and ignorance of our strengths, our resources, our identity… The structures of domination and dependence have been reproduced and reinforced by the constellation of agencies including MINUSTAH, the HRIC and large international NGOs”.

Despite the mainstream portrayal of the Haitian people waiting to be helped by handouts, the reality is that the Haitian people have never stopped organizing their communities. Despite the mounting obstacles they face, they are in competition with foreign NGO’s which siphon away funding which could potentially support their projects. However, the sad truth is that the popular Haitian organizations are advocating against the deepening dependency, putting them at odds with the goals of the major donor countries, multinational corporations and Haitian elite who stand to profit handsomely from the status quo.
Posted by Kevin Edmonds at 5:49 PM