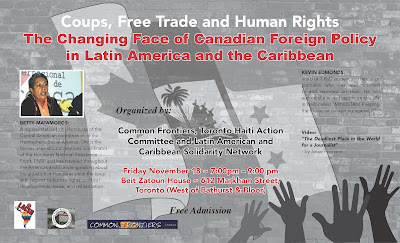 BETTY MATAMOROS: A Honduran based social activist and representative of the Central American coordination of the Hemispheric Social Alliance, specifically as part of their campaign "Foreign Military Bases out of Latin America - We are a Region of Peace." She has been organizing with social movements regionally on trade and militarization issues for decades and has been key in building international solidarity with the non-violent resistance movement in Honduras that emerged following the coup d'état in June of 2009. She is the former international relations coordinator of the Honduras National Resistance Front, FNRP. She has traveled throughout the Americas and Europe speaking about the situation in Honduras since the coup with respect to human rights, political developments, trade, and militarization.

KEVIN EDMONDS: Is a U of T PhD student and freelance journalist who has also traveled to and reported on Haiti – including serving as a volunteer observer in Haiti’s last election with the Institute for Justice and Democracy in Haiti. He co-authored recently released report on the UN in Haiti called “MINUSTAH: Keeping the peace, or conspiring against it?” Published through the Harvard School of Public Health and is a review of the human rights record on the United Nations Stabilization Mission in Haiti from 2010-2011. He will be exploring the tragic similarities of the recent foreign backed coup d’états in Haiti and Honduras, the critical role of unconstitutional, illegal, but "business friendly" regimes central to implementation of free trade deals with Canada, and the immense human cost to those involved in the popular resistance to 21st century imperialism.

Video - The Deadliest Place in the World for a Journalist - Mini-documentary on the Honduran journalists that have watched 15 colleagues assassinated in 19 months under the Lobo regime, a government Barack Obama praises for its "strong commitment to democracy" ~ by Jesse Freeston