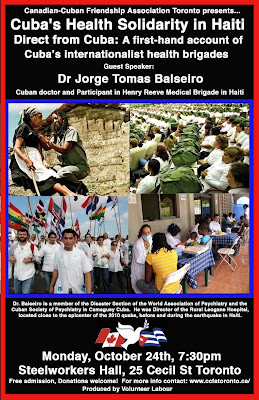 Today, I was lucky enough to be invited to briefly speak on the MINUSTAH report and the role of NGO's in Haiti at this event. It was great to meet Dr. Balsiero, hear about his extremely important and inspiring work - in addition to meeting lots of people who are already doing their own work to help Haiti.

Attached are my prepared remarks, but I had to freestyle it because time was cut short:

Good evening, my name is Kevin Edmonds and I am a representative of the Toronto Haiti Action Committee, and wanted to thank Elizabeth Hill and the Canadian Cuban Friendship Association for the invitation, in addition to Dr. Balsiero for coming all the way up here to inform us of what great work Cuba is doing in Haiti. Thank you very much.

So very quickly, the reason that I am here is because I and several other doctors and human rights advocates recently finished a report on a group which has made the Cuban medical doctors work much, much harder in Haiti. That group is the United Nations. The report came out last month, and highlights the role of the UN engaging in human rights abuses in regards to sexual assault, rape, child prostitution, engaging in the extrajudicial murder of unarmed civilians and community activists, failing to prevent forced evictions from the IDP camps, and the introduction of cholera into the country. The report is titled “MINUSTAH: Keeping the Peace or Conspiring Against It?” is available online, via the Canada Haiti Action Network site, or that of the Institute for Justice and Democracy in Haiti.

MINUSTAH has been implicated in the murders of hundreds of civilians and social activists in the slums which were loyal to Aristide and his Lavalas party. MINUSTAH has been occupying the country since the illegal 2004 coup of Jean Bertrand Aristide, and has since endorsed and legitimized unconstitutional elections in 2006 and 2010 in which Lavalas was excluded. In 2010, Lavalas and 13 other political parties were excluded, yet the former head of MINUSTAH gave his approval to these farcical elections. The presence of MINUSTAH in Haiti is a direct violation of Haitian national sovereignty – and is directly opposed to their demands for self determination and democracy.

The most well known incident attributed to MINUSTAH is the introduction of cholera into Haiti by a Nepalese contingent based near the Mirebalais River. This link has been confirmed by independent reports by the Center for Disease Control, French medical professionals, and an investigative study by the American Society for Microbiology which confirmed that the Haitian strain was identical to an earlier outbreak in Nepal. The United Nations has yet to take responsibility, or acknowledge their role in the outbreak. At the time of publication the cholera epidemic had killed 6,345 people – infecting hundreds of thousands more.

While unintentional, the cholera outbreak was due to the systemic negligence of the both the troops and the United Nations, as untreated sewage was dumped into one of Central Haiti’s main waterways - a clear violation of camp procedure. The cholera incident also reveals the deeper political economy of peacekeeping, as for many poorer governments such as Nepal, the provision of peacekeepers is an important source of national income – bringing $1,024 per month per soldier. The fact that the Nepalese soldiers themselves came from cholera infected communities reveals how the United Nations is exploiting the poorest elements of very poor countries to suppress the demands for socio-economic justice and self determination in Haiti.

If we look at the Haiti’s history of colonial and imperial brutality via slavery, counter-revolutionary repression, planned coups, embargoes, debt bondage and isolation – revolutionary Haiti became the testing ground for many of the policies which were later placed on Cuba and other progressive minded countries. The present justification of the UN mission in Haiti (MINUSTAH) has roots which will are familiar to our Cuban friends – that of containment. Despite being weakly justified due to the fact that Haiti poses a potential security risk to the region by gangsters and corrupt government – the reality is that MINUSTAH is in Haiti to contain an idea – that of making social and economic justice a reality. The reality is that the force sent to Haiti to bring security and stability has achieved the opposite. While I don’t endorse any occupation on others by any means, using the same logic there is no international occupation of Brazil with a violent crime rate nearly 6x that of Haiti, or even Washington DC which has a murder rate 3x higher.
With the help of Wikileaks, it was revealed that the new phase of “South-South” peacekeeping operations (as Brazil was and still is the primary partner in MINUSTAH) was exactly that, as it was a front for the realization of US geopolitical interests. The cables revealed that the “UN Stabilization Mission in Haiti is an indispensable tool in realizing core USG [U.S. Government] policy interests in Haiti” and “a financial and regional security bargain for the USG.” Further US cables went on to reveal that “A premature departure of MINUSTAH would leave the [Haitian] government…vulnerable to…resurgent populist and anti-market economy political forces—reversing gains of the last two years”.

A very recent delegation to Cuba on behalf of the School of Americas Watch reported that the majority of Haitians were opposed to the force, and that they were widely seen as the protectors of NGO’s and businesses in Haiti – not the people. This again highlights the systemic failure of MINUSTAH, as a great deal of the patchwork network of NGO’s claiming to do “good work” funnels money away from those who need assistance the most – leaving no public institutions or Haitian nurses or doctors. Depending on an unaccountable network of private interests to provide basic services for a population would be unacceptable in nearly every country, yet this is the basis of “development” in Haiti. The presence of MINUSTAH, and the suppression of popular democratic forces is conducive to making these NGO’s a great deal of money. As Paulo Friere stated in The Pedagogy of the Oppressed “In order to have the continued opportunity to express their generosity, the oppressors must perpetuate injustice as well. An unjust social order is the permanent fount of this generosity, which is nourished by death, despair, and poverty.”

If any gains have been made in Haiti through MINUSTAH, they have come at the expense of the Haitian people and their demands for democracy and social justice. If the United Nations was serious about protecting the Haitian people and respecting democratic processes in Haiti, it would divert the nearly $1 billion annual budget for weapons and troops to sustainable initiatives to develop public sanitation, water, healthcare and educational facilities – initiatives that the Cuban health workers like Dr. Balsiero are already undertaking. Thanks for your time.
Posted by Kevin Edmonds at 12:20 PM