Tectonic Shifts: Haiti Since the Earthquake 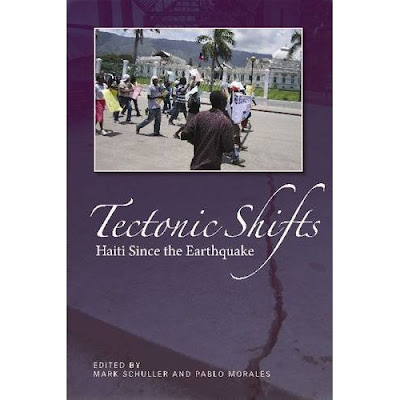 In January 2012, Mark Schuller and Pablo Morales will be putting out Tectonic Shifts: Haiti Since the Earthquake - a critical and important review of what happened in Haiti outside of the mainstream media coverage. I was lucky enough to contribute on two chapters to the book.

Here is the description:

The 7.0 magnitude earthquake that hit Haiti’s capital on January 12, 2010 will be remembered as one of the world’s deadliest disasters. The earthquake was a tragedy that gripped the nation – and the world. But as a disaster it also magnified the social ills that have beset this island nation which sits squarely in the U.S.’s diplomatic and geopolitical shadow. Particularly, the quake exposed centuries of underdevelopment and recent economic policies and the rampant inequality and exclusion within Haiti.

Tectonic Shifts offers a diverse on-the-ground set of perspectives about Haiti’s cataclysmic earthquake and the aftermath that left more than 1.5 million individuals homeless. Following a critical analysis of Haiti’s heightened vulnerability as a result of centuries of foreign policy and most recently neo-liberal economic policies, this book addresses a range of contemporary realities, foreign impositions and political changes that occurred during the relief and reconstruction periods.

Analysis of these realities offers tools for engaged, principled reflection and action. Essays by scholars, journalists, and activists, Haitians still on the island and those in the diaspora, highlight the many struggles that the Haitian people face today, providing lessons not only for those impacted and involved in relief, but for people engaged in struggles for justice and transformation in other parts of the world.
Posted by Kevin Edmonds at 12:26 AM