Discussing Domestic Violence in the Caribbean 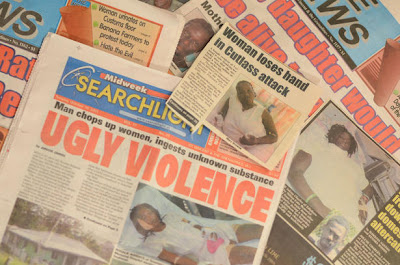 When crime and the Caribbean is uttered in the same sentence, a reference to the drug trade is unfortunately not far behind. While the drug trade is a tragic epidemic in its own right, the fracturing of families and communities by economic restructuring has led to a dramatic increase in domestic violence throughout the region. What makes matters worse is that domestic violence is often trivialized and left out of context, therefore severely hindering efforts to implement meaningful and lasting reforms.709 Credit: Jennifer Yang/Toronto Star

A case in point can be made with the comments by Deputy Prime Minister and Minister of Education of St. Vincent and the Grenadines Girlyn Miguel on January 12. Miguel chastised the island’s women by asking them “to dress themselves properly” so that they “do not give temptation to our men.” Miguel continued issuing more of an observation than a condemnation of domestic violence stating, “we need to educate our girls, give them a chance. . . . if they make any mistakes, if they do not do the things which are right, we do not have to kill them, we do not have to chop them, we need to have that love in our hearts.”

The fact that these comments were made by the island’s Minister of Education, who also happens to be the lone female cabinet member and parliamentary representative, is bad enough. However considering that St. Vincent is also the femicide capital of the Eastern Caribbean makes Miguel's lack of sensitivity and insight all the more inexcusable. In the first three weeks of 2012 alone, St. Vincent—a country with a population of roughly 120,000—tragically lost three women to domestic violence.

This crisis is not new. In 2007 St. Vincent had the third-highest rate of reported rapes in the world, according to a United Nations Office on Drugs and Crime report. Even the current Prime Minister Ralph Gonsalves has been accused of sexual assault, once by a policewoman and once by a Toronto lawyer. Both charges have since been withdrawn, but not without controversy. Recently released WikiLeaks reports have highlighted that Gonsalves offered $185,000 for the policewoman to drop the charges.

Instances such as the accusations against the Prime Minister reveal that domestic violence has long been a problem in St. Vincent - like many other Caribbean islands. That said, it is important to recognize and understand the far reaching impact that neoliberalism's recent economic transformations of the countryside has had on Caribbean families, and why such incidents of domestic violence are on the rise.

In 2011, the World Trade Organization was finally successful in its 15-year effort to terminate the Eastern Caribbean’s protected agricultural trade with Europe. The shift has had terrible consequences for the region's agricultural industry. The protection enjoyed by the small family farmers in the Caribbean was portrayed as a threat to the entire order of free trade and to the profit margins of large American multinationals like Chiquita. This loss of livelihood for tens of thousands of farmers has had a dramatic impact on traditional family dynamics, as the increased pressures and uncertainties has led to a spike in domestic violence. Newspaper headlines across the Caribbean regularly highlight deaths or graphic mutilations as a result of a “familial quarrel.” Many more incidents of abuse are not reported at all. Too often we do not consider the link between economic collapse or crisis and a rise in domestic violence. This is not uniquely confined to the Caribbean, it is something that is commonly seen throughout North America and Europe as well.

The collapse of the Caribbean economies, especially the agricultural industry, and how this has fuelled the drug trade has been the topic of study for many, but the increase in domestic violence had not been adequately explored. Men who lose their position as the traditional breadwinners in the family often face what is called a “crisis of masculinity.” Unable to provide for their families due to rising unemployment, they unfortunately often resort to violence to re-establish their dominance and control upon their families. Such theories have contributed significantly to the general understanding of domestic violence in industrialized countries, but have yet to be applied to the Caribbean on a wider scale.

This is not to say that anti-domestic violence initiatives have not taken place in the Caribbean. In 2003, Grenada established a special domestic violence unit, consisting of community outreach programs, counselling, and educational efforts to stem the rising incidence of violence in both households and communities.

St. Lucia has established similar measures, creating a women’s support center and a 24-hour hotline which offers counselling. It has also strengthened court protection orders, but domestic violence islandwide is still through the roof. In St. Lucia, the national newspaper The Voice reported in 2010 that domestic violence was now a primary cause of murders on the island.

The first step to tackling the issue of domestic violence is to acknowledge the seriousness of the problem and give it the proper context. In other words, erasing the mentality that domestic violence is something that women bring upon themselves for not dressing right or doing “the right things.” Domestic violence should not be just a women’s issue. It affects entire communities and nations, the roots of which are societal in nature, and often triggered by economic crisis and uncertainty. The way to move forward in tackling the issue of domestic violence is to examine it holistically, looking not only at the victims, but at the triggers as well. Judging by the comments of Girlyn Miguel, it appears there is still a long way to go before the conversation is discussed in the serious manner it deserves.
Posted by Kevin Edmonds at 1:49 PM No comments:

The Caribbean in 2012: Looking Forward 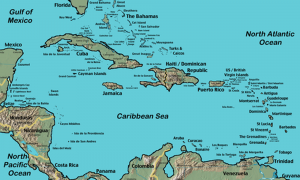 Two thousand and twelve holds both a great deal of uncertainty and cautious optimism for the Caribbean. The election of new governments over the past year in Jamaica and St. Lucia, the controversial re-election of an incumbent in Guyana, and the selection of Michel Martelly out of a flawed election in Haiti has sent mixed signals about the overall direction the region is taking. With the global economy still in an extremely volatile state, the predominately service-oriented economies of the Caribbean remain extremely vulnerable to the action or inaction of Europe and the United States.

In Guyana, December’s election saw Donald Ramotar of the incumbent People’s Progressive Party emerge with the win—albeit with a minority government. The delayed release of election results triggered a wave of controversy and political tension within the country that has yet to cease. The Opposition leader, David Granger, just announced the possibility of a snap election in the country to capitalize on the current controversy surrounding the PPP.

In Haiti, the sombre two year anniversary of the earthquake has come and gone, signalled by another round of lofty reconstruction promises in what many consider to be a tragically stalled effort. The accountability and legitimacy of the United Nations Stabilization Mission in Haiti continues to erode after being unapologetic for their role in introducing cholera into the country and releasing a group of Uruguayan soldiers accused of raping a young boy without charge, despite the existence of video evidence. President Michel Martelly has been under fire for failing to overcome a standstill over the implementation of his national education plans, while proudly calling for the re-establishment of the notorious Haitian army. Hopefully 2012 will be the year of lessons learned, starting with a concerted and coordinated effort to invest in sustainable and publically accessible partnerships and investment.

In Jamaica, Portia Simpson Miller’s return to power has come with the promises of shaking up the country by tossing out the monarchy and finally making Jamaica an independent republic. While perhaps more symbolic than substance, it offers to deliver important political capital, which will be much needed, especially when facing the more daunting issues of managing and reducing debt, corruption, and crime. Miller was partly elected on her promise of using state funding to reduce the unemployment rate. For the United States, Miller’s election confirms their worst fears of a diversion from the IMF’s prescription. As WikiLeaks revealed, “In such a scenario [the election of Miller], Jamaica could go the way of Haiti: fatally driven by crime, poverty, drugs, gangs, social disintegration, and emigration - all more reasons for strong US support for Golding's ongoing reforms.” Whether or not Miller will be able to run Jamaica in the interests of the Jamaican people will be a story to watch throughout 2012.

In St. Lucia, Prime Minster Kenny Anthony swept back into power after a five year absence, defeating Stephenson King of the United Workers Party. Facing extensive infrastructure and housing damage due to Hurricane Tomas in 2010, increasing crime, and a volatile tourist market, the Prime Minster is currently looking east in a risky effort to play China and Taiwan against each other in order to secure the largest promises of aid and development for St. Lucia.

Finally, the emergence of the Community of Latin American and Caribbean States (CELAC) signals an important shift away from the traditional U.S. influence in the Caribbean. It is too early to determine whether or not a competing organization like CELAC will be able to deliver on the promises of sustainable development and strengthen South-South cooperation in the Caribbean, or if the Caribbean will fare as a forgotten partner in this predominately Latin American venture. Several Caribbean countries (Dominica, St. Vincent, and Antigua) have already joined ALBA, revealing that the interest in new forums of cooperation and partnership are not based on motives of political opportunism, but rather due to the overwhelmingly negative experience the Caribbean has had with neoliberal globalization. Looking at the history of the lack of benefits the Caribbean has had in adopting initiatives like the Caribbean Basin Initiative, it is hardly surprising.


Kevin Edmonds is a new NACLA blogger focusing on the Caribbean. He will be blogging at nacla.org/blog/other-side-paradise. Edmonds is former NACLA research associate and current PhD student at the University of Toronto, where he is studying the impact of neoliberalism on the St. Lucian banana trade (where he witnessed much of his family lose their livelihood) and the possibilities of alternative development in the Caribbean. As an active Haiti solidarity activist he has written extensively on the issues of human rights, development, and foreign intervention in Haiti.
Posted by Kevin Edmonds at 11:54 AM No comments: