ALBA Expands its Allies in the Caribbean (Part 1 of 2)

The weekend of February 4th and 5th saw the Bolivarian Alternative of the Americas (ALBA) convene their 11th summit in Caracas, Venezuela. ALBA began as an alternative vision to the reckless neoliberal agenda promoted by Washington throughout Latin America and the Caribbean. In 2004, Venezuela and Cuba sought to establish a regional alliance which would be committed to an agenda of poverty eradication, sustainable development and social justice founded upon the values of co-operation, equality, and solidarity. The regional integration promoted by ALBA importantly stresses policy flexibility, fair trade, and recognition of the unique circumstances faced by the small Caribbean economies. 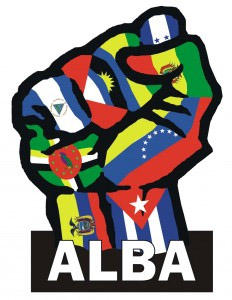 As many expected, the weekend summit contained the standard denunciations of American imperialism and the need for deeper economic integration – but surprisingly ended with St. Lucia and Suriname expressing their desire for full membership in the organization, with Haiti also joining ranks as a permanent observer.

While St. Lucia and Suriname cannot fully join the organization without following the necessary political processes in their respective countries, the two nations were admitted to the meeting as “special guest members”— a prior step to their full entry. St. Lucia, Suriname, and Haiti would join their fellow CARICOM neighbours Dominica, who joined the regional organization in 2008, and St. Vincent and Antigua who became members in 2009.

Professor Norman Girvan of the University of the West Indies, a leading scholar in Caribbean political economy sees the recent regional shift towards ALBA as the result of the organization providing a more dynamic alternative to CARICOM, remarking that “(ALBA) poses the urgency of revitalising CARICOM and if CARICOM continues to be relatively moribund in its economic integration aspect then inevitably ALBA will become an attractive alternative for more and more CARICOM states.”

Furthermore, Petrocaribe— an alliance which allows Caribbean nations to purchase oil from Venezuela in a preferential agreement, has proved to be an attractive option for the cash strapped governments. The oil can be paid for over a 25 year period, at a 1 percent interest rate.

According to the United Nations Conference on Trade and Development, in comparison to the traditional methods of purchasing oil in the region, Petrocaribe provides significant savings to the participating countries, providing an importance source of finance which respective governments can use to invest in social development programs. David Jessop, the Director of the Caribbean Council stated that “If it were not for the energy lifeline that it [Venezuela] has provided to every Caribbean nation other than Trinidad and Barbados, much of the region would by now be in economic free fall.”

It is precisely because the Caribbean has been hit so hard by the forces of globalization that many CARICOM members are looking to establish deeper alliances with Caracas and Havana instead of Washington— and for good reason.

The forceful intervention by Washington on behalf of the financial interests of multinational fruit companies like Chiquita in the nearly 20 year long “banana war” at the World Trade Organization fundamentally changed the economies of St. Lucia, Dominica and St. Vincent for the worse. Furthermore in Haiti, the reintroduction of a sweatshop model of development called HOPE II, is little more than a recycled version of Ronald Reagan’s failed Caribbean Basin Initiative of the 1980’s which perversely sees the country’s poverty as its greatest asset. Based upon the poverty inducing actions of the United States in the region, it makes one wonder how the Caribbean did not explore this alternative alliance to neoliberal globalization earlier.

Speaking on the economic realities which sparked St. Lucia’s decision to explore membership in ALBA, Prime Minister Kenny Anthony stated that “It is going to be critical and crucial that St. Lucia look for new opportunities of support and in particular for governments who are willing to assist the development of the country…So we have to be busy, we have to search for new sources of funding and it is in that context that we have to look at organisations like ALBA as an option.”

According to Professor Girvan, this makes perfect sense as ALBA is “mobilising resources on a much more significant scale... The ALBA bank and Petrocaribe funding are much larger than those mobilized by the CARICOM Development Fund and ALBA is moving ahead they keep launching into new projects for example food security and agriculture that CARICOM has been talking a lot but doing very little.”

Looking at the record of assistance ALBA has already provided to its three initial Caribbean members, it provides a strong incentive to other CARICOM nations looking to join the bloc pragmatic reasons.

Figures taken from: Is ALBA a New Model of Integration? Reflections on the CARICOM Experience by Norman Girvan.

Despite the many successes of ALBA in the Caribbean so far, the future of the organization hangs in a precarious position, as the October elections in Venezuela will do a great deal to determine both its strength and durability. Nevertheless, the expansion of the group’s membership in the Caribbean, in addition to the newly formed Community of Latin American and Caribbean States signals an important shift away from American hegemony in the region – that it is no longer Washington’s “backyard” anymore – but rather a region which has been taken for granted and is now looking to put their priorities first for a change. It is a change which is long overdue.

(The second part of this will focus specifically on the relationship between ALBA and Haiti).

Posted by Kevin Edmonds at 3:31 PM