Canada: A Late but Eager Partner in Policing the Caribbean 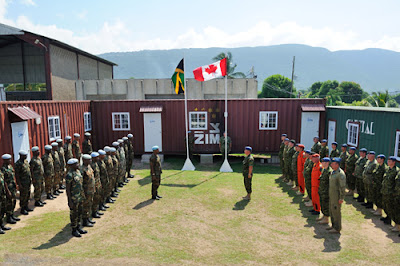 Since 2006 Canadian Forces have participated in numerous counter-narcotics missions in the Caribbean basin called Operation Caribbe, as part of the wider U.S. Joint Interagency Task Force-South. Arguably the most visible, and perhaps the only example that the Canadian people have had of their armed forces patrolling international waters in the Caribbean occurred with the recent disclosure on January 16. According to the report, between October and November 2010, the HMCS St. John’s Canadian naval ship intercepted a self-propelled semi-submersible submarine filled with 6,700 kg of cocaine, with a street value of $180 million.

735 (Photo Credit: Corporal Roxanne Shewchuk, PEI Guardian)This announcement might come as a surprise to many Canadians, but the Canadian Naval Review revealed that in October 2010, U.S. Coast Guard Law Enforcement Detachments began operating on Canadian warships, with an authorization of specialized boarding, search and seizure capabilities, and a legal mandate to participate in and enforce U.S. counter narcotics laws in the open ocean. The same review went on to state that these operations “enhance Canada’s efforts to promote stability in Latin America and the Caribbean – a region increasingly important to Canadian trade and security”.

Upon the return of the fleet, which included the HMCS St. John's, Athabaskan, Algonquin, the submarine Corner Brook, several CH-124 Sea King helicopters and CP-140 Aurora long-range patrol aircraft, Minister of National Defence Peter Mackay proudly remarked that “During the past three months, our Royal Canadian Navy and Royal Canadian Air Force crews have continued to provide crucial support to the law enforcement interdiction and counter-drug surveillance missions alongside our U.S. and multinational allies on both the Atlantic and Pacific coasts . . . Their commitment to the ongoing efforts to suppress the illegal trafficking of drugs by sea is of great importance to our citizens in communities across North America."

Such Canadian collaboration with the United States in the “War on Drugs” raises important concerns about both the growing presence and militarization of Canadian forces in the Caribbean. In June the Canadian government announced the opening of a military base in Jamaica, under the justification that the base would provide a strategic staging point from which they can assist Caribbean nations in a speedy manner in the unfortunate occurrence of a natural disaster, such as the devastating earthquake which hit Haiti in 2010.

Historically speaking, Canadian-Jamaican military ties are not new. Canada has maintained an active role in providing training and equipment to the Jamaican Defence Forces for over 40 years. More recently, special security teams from Guyana and Trinidad have been trained in methods to “maintain security and stability” at new military facilities located in Moneague, Jamaica.

These facilities are the new home of the Caribbean Junior Command and Staff College, which was financed in part by the Canadian government, and provides a home for elite training that focuses on the development of “Caribbean-centric” tactical operations, including Jungle Warfare, Air Operations, Urban Warfare, and Internal Security Operations. Furthermore, the Canadian Military Training and Cooperation Program has also revealed the creation of a Counter Terrorism Capacity Building Project in Jamaica, with the goal that it will “eventually become a regional Special Operations Force centre of excellence for training their Caribbean allies.”

The question is: how closely are these humanitarian/security operations in the Caribbean related?

As a student of international intervention in the Caribbean, it would be naive to assume the opening of a Canadian military base in Jamaica is simply for potential humanitarian purposes and is not connected to anti-narcotics operations or to maintain the wider Canadian economic interests in the Caribbean (e.g. Alcan Aluminium Limited in Jamaica).

A closer examination of history reveals that during the 1970’s, the Canadian military presence and training operations in Jamaica were for that exact purpose. Learning from the experience in Guyana when the government of Forbes Burnham nationalized Alcan properties in Guyana in 1971, Canada launched operation NIMROD CAPER in Jamaica with the objective of "securing and protecting the Alcan facilities [in Jamaica] from mob unrest and outright seizure or sabotage.”

Looking at the training operations undertaken by the Jamaican Defence Forces, it is relatively safe to assume that counter-terrorism, internal security operations, and urban warfare training is very closely related to the increasing influence the drug trade has had on Jamaica and the Caribbean as a whole. The violent saga to apprehrend Christoper “Dudus” Coke in the summer of 2010, revealed how entrenched drugs and gangs are, not just in the streets, but also in the highest political offices. WikiLeaks has added to the analysis by revealing that the U.S. government has deep fears that Jamaica may be on the verge of falling into the category of a failed state. The shift of Canadian troops into Jamaica may be the first step in a wider effort to protect foreign assets while much needed development assistance to the Jamaican government is replaced with military cooperation.

It is of vital importance to remember that Canada’s actions in Jamaica are not an anomaly. Canadian foreign policy in Latin America and the Caribbean has been increasingly focused on security with an overall militarization of its relationship with the region. The Canadian government’s recent funding of controversial Latin America and Caribbean security forces also follows a pattern of increasing security where the economic interests of Canadian firms are very high.

Most recently, last November the Canadian government announced the distribution of $7.1 million Canadian dollars to strengthen the law and security (i.e. police and military) establishment in Guatemala. Canadian mining corporations such as INCO, HudBay Minerals, and Goldcorp all have major interests in Guatemala, and have previously employed police and military to intimidate and physically attack indigenous communities who are against the projects.

Secondly, Haiti stands out as the most prominent example of this new change towards militarized objectives and tactics, as the Canadian military directly participated in the 2004 coup of Jean Bertrand Aristide, who proposed policies which would be directly at odds with the interests of many Canadian corporations. After the coup, the Royal Canadian Mounted Police helped to train the Haitian National Police, which was systematically purged of Aristide supporters. A recent analysis has revealed that a concentrated effort was made to staff the new police force with right-wing paramilitaries and former Ton Ton Macoutes. Since the 2010 earthquake, the Canadian government has stated that its priority in Haiti is the funding of security, primarily the training and equipping of police and prisons.

With the growing influence of the drug trade, will this lead to more visible forms of intervention in the Caribbean? What impact will this have on Caribbean sovereignty? As it stands, only time will tell what direction the Canada will take toward Jamaica and the wider Caribbean. What has become more clear however, is that the declining influence of the United States in the region has coincided with the increasingly militarization of Canadian-Caribbean relations. Whether this shift is on purpose, or coincidental remains to be seen, but based upon the history of foreign powers intervening in the region, it is something to keep an eye on. The presence of foreign troops in the Caribbean has hardly ever been for the protection of people, but rather profits.
Posted by Kevin Edmonds at 2:47 PM