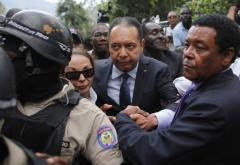 · Institute for Justice and Democracy in Haiti: www.ijdh.org
Posted by Kevin Edmonds at 4:11 PM