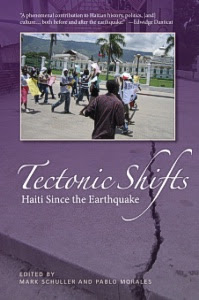 Tectonic Shifts offers a diverse on-the-ground set of perspectives about Haiti’s cataclysmic earthquake and the aftermath that left more than 1.5 million individuals homeless. Following a critical analysis of Haiti’s heightened vulnerability as a result of centuries of foreign policy and most recently neoliberal economic policies, this book addresses a range of contemporary realities, foreign impositions, and political changes that occurred during the relief and reconstruction periods.

Analysis of these realities offers tools for engaged, principled reflection and action. Essays by scholars, journalists, activists, and Haitians still on the island and those in the Diaspora highlight the many struggles that the Haitian people face today, providing lessons not only for those impacted and involved in relief, but for people engaged in struggles for justice and transformation in other parts of the world.

Tectonic Shifts contributors Nicole Phillips of the Institute for Justice and Democracy in Haiti, and Kevin Edmonds of the Toronto Haiti Action Committee will be on hand to discuss the state of current events in Haiti including: The role of the United Nations in human rights abuses, grassroots efforts to combat gender based violence, the ongoing housing emergency, and the predatory role many NGO's have had on the ground.
Posted by Kevin Edmonds at 4:16 PM