Canadian Banks and Economic Control in the Caribbean 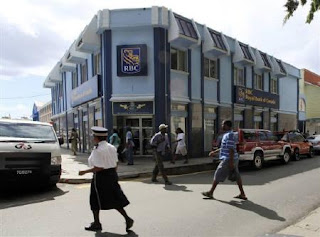 In December 2011, it was reported that the Royal Bank of Canada and the Bank of Nova Scotia were both exploring a return to Cuba under the financial reforms of Raul Castro, more than 50 years after they had been expelled by his brother Fidel. Canadian banks operating in the Caribbean are nothing new, however, the Royal Bank of Canada proudly claims that it had branches in the Caribbean before it had opened any in Western Canada.

Canada’s role in the Caribbean is much longer and deeper than most think. The Royal Bank of Canada’s involvement with the Caribbean began in 1864, when a group from Halifax engaged in trade, bringing flour, cod and timber south, returning north with a cargo of sugar, rum and spices. The Bank of Nova Scotia would quickly follow and go on to build a branch in Jamaica in 1889. Such events were a precursor to larger scale Canadian visions of Caribbean control. At the end of World War I, Ottawa had asked the Imperial War Cabinet if it could take possession of the British West Indies as compensation for Canada’s defence of the British Empire. While the request did not materialize, it simply meant that Canada had to find another way to exercise its interests in the Caribbean.

When Canadian banks entered the Caribbean under colonial rule, the local populations had virtually no say over who controlled their banks. In The Black Book of Canadian Foreign Policy, Yves Engler remarks thus, “Canadian banks have been traditionally conservative in releasing capital to local manufacturers, retailers and farmers. This has stunted the region’s development and heightened these countries dependency on foreign imports. Further stunting Caribbean development, the banks’ profits are repatriated home.” This should not comes as a surprise, as Engler remarks, “West Indian banking laws, when they were written, were written with our help and advice for our [Canadian] benefit.”

Such foreign control increases the overall dependency of the Caribbean, as the Caribbean people are marginalized in the development of their own countries, while foreign multinationals can easily access credit to develop enclave industries. As a result, it should not be surprising that due to such corporate control the region is now dangerously dependent on food imports, with enclave industries like tourism and extractive industries such as mining being dominated by foreign interests which repatriate their profits. This contradictory model of “development” which currently exists in the Caribbean is due to the ongoing legacy of colonial historical structures, which created massive agricultural export economies across the region, while at the same time remaining net importers of foodstuffs.

Fast-forward to 2008, when Trinidad's RBTT overwhelmingly accepted a takeover by the Royal Bank of Canada, signaling an increasing interest in the region. This move led to the Canadian control over the English-speaking Caribbean's three largest banks, with $42 billion in assets, four times those of its roughly 40 remaining locally owned banks. Canadian control over Caribbean banks is also very deceptive in their branding, as the First Caribbean International Bank is totally controlled by the Canadian Imperial Bank of Commerce.

The presence of such banks does not just result in significant foreign economic control over the Caribbean, it also provides attractive havens where Canadian banks can avoid paying taxes at home. Four out of the ten top destinations for Canadian direct investment abroad are Caribbean tax havens. A June 2008 study by the University of Quebec at Montreal concluded that the five major Canadian banks avoided $16 billion in federal and provincial taxes through offshore affiliates in Barbados, Bermuda, the Cayman Islands, and the Bahamas between 1991 and 2003, and $2.4 billion in 2007 alone.

During protests aimed at Canadian banks in Trinidad during the 1970's, a Canadian foreign affairs expert told Maclean's magazine that "we’re not colonialists by intent, but by circumstances." Regardless of intent, the results are still the same. Foreign financial domination in combination with continued attacks on the region’s export agriculture and highly vulnerable tourism industries have placed massive obstacles in front of the Caribbean governments’ efforts to develop their economies towards greater self sufficiency. With the 50 year anniversary of Jamaican and Trinidadian independence occurring later this year, it is a bittersweet time to reflect on how much real, substantive freedom and independence has been gained. The shifts towards alternative regional alliances like the Community of Latin American and Caribbean States hold some promise, but only if they can work to redirect the economies away from the contradictory models of development inherited from colonialism towards increasing the general welfare of the people, instead of foreign corporations.
Posted by Kevin Edmonds at 6:31 PM