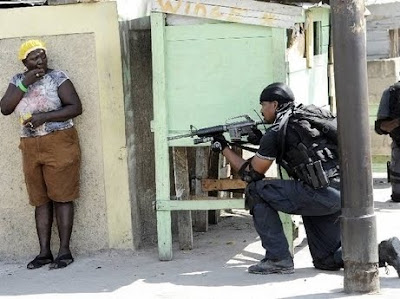 The killing of 21 people— including a 13-year-old girl and an elderly man—by the Jamaican police in the past six days has highlighted the systemic problem the country is having with controlling the inappropriate use of deadly force. To say that the country is outraged by the actions of the police would be an understatement. To say that the people were shocked would be a lie, as events like this have become all too common in Jamaica. So far in 2012, 45 people have been killed by the Jamaican police. What makes matters worse is that when one looks at the record of the police being held accountable for their actions, it is safe to say that those responsible for the extrajudicial killings and other human rights abuses will nearly always go unpunished.

For example, out of more than 2,220 fatal shootings by police recorded between 2000 and 2010, only two officers have been convicted. During the state of emergency in May 2010, 76 people were killed over two days by Jamaican security forces in their search for Christopher “Dudus” Coke. Nearly two years later, not one officer has been held responsible for those killings. Amnesty International’s Chiara Liguori remarked that “The problem is that police continue to enter marginalized inner-city communities as if everyone there was a criminal suspect."

Because Jamaica’s record of holding the police accountable for the killings of civilians is undeniably bad, and as such inspires little confidence that justice will be served, groups like Families Against State Terrorism and Jamaicans for Justice have emerged to try to raise awareness of the routine human rights abuses committed by the Jamaican police. Another major part of the work that the groups engage in is to overcome the misconceptions that widespread police violence is somehow serving the purpose of maintaining “law and order.”

Speaking on the recent civilian killings, Jamaicans For Justice spokesperson Susan Goffe pointed out the dangerous hypocrisy of the situation, remarking, “That 21 persons should have lost their lives is bad enough. That these deaths occurred at the hands of those sworn to protect, serve and reassure is appalling and completely unacceptable.”

Due to their stance of holding the police and state accountable for their actions, such groups have often faced public criticism along the lines that they care more for the rights of the perpetrators rather than the victims of crime. In September 2000, the former Prime Minister, P J Patterson, appeared to echo this point of view, stating that "Human rights cannot be confined to the murderers and rapists and robbers . . . The innocent on which they trade also have human rights."

Jamaicans for Justice counters such lines of thinking by calling on the public to think of the wider consequences that unlawful police action can have on their own lives and communities. The website for the group states that “Many Jamaicans believe that the police will only infringe on the rights of ‘certain’ people (usually residents of socio-economically depressed communities) and the abuse of the rights by the police is justified in the interest of fighting crime. This is a dangerous notion as an abrogation of one’s rights today is a threat to everyone’s rights tomorrow. People who are of the mindset that only ‘certain’ people’s rights are abrogated and the infringements of rights are necessary to fight crime are not aware that their rights too can be trampled and when it does happen to them, they adopt a different perspective.”

The hostile environment in Jamaica, which had a murder rate of 42 per 100,000 in 2011, is further compounded by the fact that the police do not face any accountability for their actions. If the police wish to truly fight crime effectively, they will have to earn the trust of the populations they are expected to serve— which will be a long and difficult task.

The obstacles facing Jamaica in regards to crime are very steep, and the only way forward now is for the police and the Jamaican government to lead by example, and hold those guilty of engaging in criminal acts against the civilian population accountable. To do otherwise sends a dangerous signal to all that certain segments of society are above the law, and that many others unfortunately exist outside of it.
Posted by Kevin Edmonds at 6:41 PM