A Colonial WikiLeaks? The Migrated Archives and the Caribbean Pt.2 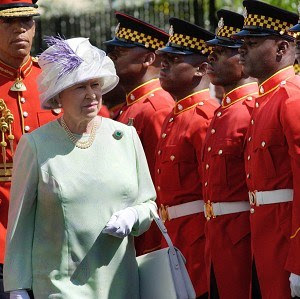 As reported last week, April 18th marked the public release of the first batch of the secret colonial documents known as the "migrated archives." Only one day removed from the release, British media has been taken with the story, with headlines like Sins of Colonialists Lay Concealed for Decades in Secret Archive, Crimes of Empire Revealed, Colonial Papers and the Ugly Legacy of Empire, Britain Planned Posion Gas Tests in Botswana, and Colonial Office Files Detail 'Eliminations' to Choke Malayan Insurgency reveals the depth of the archives opening salvo.

In part two, Robert Hill, Professor of Afro-American and Caribbean History at UCLA, who has been deeply involved in the "migrated archives" since their discovery, shares his insights into the release of the archives and what it entails for the Caribbean history. Professor Hill is editor of The Marcus Garvey and Universal Negro Improvement Association Papers Project, and is also the Literary Executor of C.L.R. James, the Marxist historian and Pan-African political activist.

The release of the migrated archives has been called both a colonial conspiracy and a bureaucratic bungle. Can you provide some more insight as to why the British government was compelled to release the documents? Why couldn’t they have just kept them classified?

There was a great deal of bureaucratic bumbling in the handling of the so called “migrated archives.” There’s no question that the migrated archives presented the foreign office with a huge and complex challenge, and in the face of the complexity of what they were presented with, the Foreign Office just dropped them; basically they just could not arrive at any kind of solution. This is going back now to the 1980’s and 1990’s and each time there were so many countervailing problems, but they simply could not solve the most pressing problem: that these archives were removed from former British colonies and they were removed secretly. Government officials and civil servants knew of this, I know for a fact in Jamaica, I talked with two civil servants who are able to tell me the names of the two officials who came out from England to supervise the transfer of the records—but it was done in a very hush-hush way.

Now is that a colonial conspiracy? I don’t know. They certainly weren’t making it public, and they were getting the cooperation of the civil servants who were charged to assist in the secret transfer of these records.

Now having done that, it’s kind of like having a tar baby syndrome, having grasped the files, they did not think through what would later on confront them. Under British law you have to turn over these documents to the national archives or seek an exemption from the Lord Chancellor. Well, they could not, because they tried to turn them over to the National Archives, and the national archives refused to touch them, basically saying this is your baby, we don’t want anything to do with this. But they couldn’t legitimately get an exemption from the Lord Chancellor so essentially the Foreign Office found that it was holding official records illegally—and that’s the problem. And so where were they going to put them? The National Archives, after all, is the legally constituted body set up to receive all official records in Great Britain, yet they would not take them. An impasse, in other words, developed and no one could come up with a solution.

They came up with three possible options. One was to go through them, and to take out items they felt were still very, very sensitive, then return them to their respective colonial governments, that they rightfully belong to. We don’t know why they declined to do that, another option was just to say that these were the property of the government of Great Britain and we aren’t going to return them. The other one was to turn them over to the National Archives – but there were problems with each one of the options.

The people who solved the problem were the former Mau Mau detainees in Kenya, who by suing the Queen for damages for the torture and abuse at the hands of the British colonial regime in Kenya forced the issue, and by forcing the issue into the public domain, into the public arena, they solved the problem. In other words, we have to thank these former Mau Mau detainees, and the British government should thank them too— they came up with a resolution that was to turn these documents over to the prosecution, against the queen for tort damages. They forced, in other words, the resolution.

Now the British government is caught with its pants down, and of course not wanting to seem dishonourable, the foreign secretary of the British government, William Hague, stood up in the House of Commons and made the official declaration that we have nothing to hide, and that they were going to turn over all of this material, except for the names of individuals and identities that are covered under the Freedom of Information act, such as the name of informants. They say everything is going to be released. So I don’t think that if they are being genuine they can say everything but these identities will be revealed and then undertake any major redactions. I’ve also been assured that the person, the master of Claire College at Cambridge, Professor Anthony Badger, who has been responsible for the processing of the material, has also assured me that everything is going to be released. The glare of publicity is so intense that I don’t think the British government would risk being found out that they are releasing and at the same time withholding documents.

In your opinion, what potential does the release of the migrated archives have in potentially reshaping and rewriting Caribbean history, not only during the colonial period, but also upon many of our traditional narratives of independence?

Now will this have an impact on the narratives of independence and the colonial period? I think it’s going to have a major impact. I can’t be authoritative or definitive, I think what we’re going to see is the great degree of collaboration between the departing colonial regime, or the colonial imperial government of Britain and its collaboration with the local political elites. That unfortunately or fortunately is going to come to light. It will be of different degrees in Jamaica, it’s going to shine the light on the relationship between the British governor and the British colonial secretary on the one hand, and Alexander Bustamante and Norman Manley, the leaders of the JLP and the PNP.

I think that this is going to really enable us to see the agreements, the silent, secret political agreements that were hatched between them. That I think is going to break open a whole important sphere that we have been shut out from until now. In addition, I think it’s going to show us the degree to which the British government resorted to coercion, not just consensus building, but when confronted as they were, say in Jamaica or Guyana, with a serious political challenge—they were quick to resort to coercive measures to suppress and repress these challenges.

Those are the two main areas, now beyond that—what I think we are going to see—and again this is very provisional—we are going to see how fragile the colonial regime was. In my view, the colonial regime was terrified of the populous, it had a profound anxiety of any kind of violent clash—and we will be able to read the official cables between the colony and the metropole in Britain, and trace out their thinking. Remember now, we’re talking about a colonial period that is referred to in the literature as the terminal phase of colonization. That’s the period that I think the bulk of these migrated archives will cover.

I think that some of us have had suspicious about the deals that were struck behind the scenes, between the British colonial regime and (Forbes) Burnham, or a deal struck between the British government in Jamaica and Bustamante to split the popular movement. In Guyana it split along ethnic and racial lines, in Jamaica it was split along ideological lines. But, either way, the divide and conquer strategy, we have long suspected that that was a central element of the British strategy. It always is. And the question is, why did they fall for it? What were they promised? What were the specific rewards of playing along and accepting these deals?

We want to know concretely dates, times, places, identities of people involved in these negotiations. Now we don’t know that this will be in the migrated archives, it is just a suspicion—but the reason why they were removed is because they were potentially very damaging. I don’t think that the nationalist elites in the Caribbean will emerge with their reputations intact. So we have to prepare ourselves for some pretty explosive disclosures, but then again we might be disappointed. We will have to wait and see.

The final segment of my interview with Professor Robert Hill will be continue next week.
Posted by Kevin Edmonds at 3:14 PM