The People vs. The Pirates: Controversy Abounds in Haitian Reconstruction Investigations 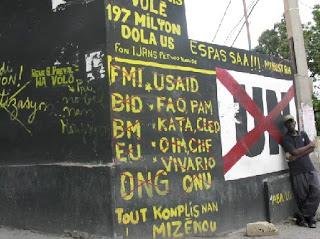 With the release of two separate investigations this week, it is becoming increasingly clear why the reconstruction has failed the Haitian people on such a massive scale—it is lucrative business opportunity first, with the humanitarian priorities coming in at a distant second.

On March 30, the Washington-based Center for Economic and Policy Research’s (CEPR) Haiti Relief and Reconstruction Watch (HHRW) released the results of a scathing investigation, which revealed that out of the nearly $400 million spent by USAID in Haiti, only 0.02% of the procurement contracts went to local firms. On the opposite side of the procurement spectrum, U.S. firms concentrated in the Washington DC, Virginia, and Maryland area were rewarded with a staggering 77.46% of the contracts.

The largest of the procurements, a $173 million contract to the U.S.-based Chemonics International, was given to the company’s Haiti Recovery Initiation. One of the primary aims of the Initiative was the $2 million construction of a temporary parliament building for the Haitian government. The building itself was inaugurated during a large photo-op with President Michel Martelly and U.S. Ambassador Kenneth Merton in November, but has sat dormant ever since. Since handing over the building to the Haitian government, approximately $775,000 has been spent by the Haitian government to date to finish the building. U.S. Embassy spokesman Jon Piechowski regarded the situation as unproblematic, saying that “the offer was to provide a building,” but never to finish it, or even make it functional.

Two weeks ago, Jacob Kushner and Jean Pharés Jérôme of the Global Post reported on the troubling USAID project, writing that “the building is scattered with woodwork trimmings and debris from a costly ongoing renovation paid for by the Haitian treasury because legislators say the United States never finished the job. And critics in Haiti charge that the unfinished work and empty building stand as a powerful metaphor for much of what is wrong with USAID’s approach to development in Haiti: that it lacks coordination with and input from the Haitians themselves about how best to undertake reconstruction projects.”

The lack of transparency surrounding the reconstruction is largely a result of Haiti’s NGO model of development, which entails the privatization of responsibility. While corruption in Haitian public companies was the central justification for their privatization in the past decades, the current reconstruction process has many built in loopholes which invite abuse from international contractors. CEPR has highlighted the existence of one of these loopholes, called an “indirect cost rate.” According to CEPR “This allows a portion of all funds allocated to go towards costs not related to the actual program, in other words, back to their headquarters inside the Beltway. Both Chemonics and USAID declined to provide HRRW with the Indirect Cost Rate stipulated in their contract.”

Unfortunately, Chemonics is not alone in providing shoddy but expensive buildings to Haiti. In August of last year, Isabel MacDonald and Isabeau Doucet wrote an article titled The Shelters That Clinton Built, revealing that one of Bill Clinton’s Interim Haiti Recovery Commission’s (IHRC) first projects sent down twenty formaldehyde-laced trailers to be used as schools in the coastal city of Léogâne. The manufacturer of the trailers, Clayton Homes, is now being sued in the United States for providing the Federal Emergency Management Agency (FEMA) with similar formaldehyde-laced trailers after Hurricane Katrina in 2005.

Nor does it make logical developmental sense to ship prefabricated buildings to Haiti, since the construction of the same buildings in Haiti would provide jobs, stimulate the Haitian construction industry, and allow families to send their children to school and support other small businesses. This “multiplier effect” is a common theme in development circles, but is routinely missing in Haitian reconstruction efforts, as the shipping of prefabricated buildings has become the new trend.

Once in Haiti, the trailers were largely unusable, containing high levels of mold, reaching over 100 degrees, and several lacked water and sanitation facilities. Lab tests conducted during the investigation revealed that formaldehyde levels reached 250 parts per billion, which were “two and a half times the level at which the CDC warned FEMA trailer residents that sensitive people, such as children, could face adverse health effects.”

MacDonald and Doucet wrote that “the Knoxville News Sentinel reported that Clayton Homes had been awarded a million-dollar contract to ship twenty trailers to Haiti, for use as classrooms for schoolchildren. The Clinton Foundation claims it went through a bidding process before awarding the contract to Clayton Homes, which was already embroiled in the FEMA trailer lawsuit. But despite repeated requests, the foundation has not provided The Nation with any documentation of this process.”

If major donor organizations like USAID and the IHRC can treat the Haitian government with such disregard and disrespect in the reconstruction process, it becomes clearer, but no less disturbing, how Haiti’s half million internally displaced people have been totally marginalized more than two years after the earthquake.

While U.S. companies are taking huge contracts to provide unusable buildings, President Michel Martelly has recently found himself in the middle of a scandal related to his awarding of no-bid construction contracts to Senator Felix Bautista of the Dominican Republic. Dominican journalist Nuria Piera aired a story on Nuria Investigacion where she stated that she had found that one of Bautista’s companies, HADCOM Construction, was awarded a $350 million no-bid contract for reconstruction work. In addition, Piera uncovered that Bautista had allegedly given more than $2.5 million to Haiti’s President Michel Martelly before and after he won the presidency in 2011.

According to the Haitian weekly Haiti Liberté, “If Nuria’s charges prove true, wholly or even partially, they may deal a mortal blow to Martelly’s presidency. Already, Deputy Arnel Belizaire, who was illegally arrested last November on Martelly’s orders, says he is close to calling for the convening of Parliament’s High Court of Justice to impeach the President. Another deputy, Tholbert Alexis, told Scoop FM that he would push for a special commission to look into Nuria Piera’s allegations.”

The newest allegations add on to the growing controversy surrounding Martelly’s relatively new presidency. Already shrouded in an aura of illegitimacy due to highly flawed elections, Martelly has been confronted with allegations that he holds dual citizenship, thereby disqualifying him from holding the country’s highest office. Martelly’s first national program, the implementation of free education to all Haitian children has been under intense scrutiny due to the disappearance of tens of millions of dollars. Finally, it is widely believed that Martelly’s third nominee for Prime Minister (also the choice of Bill Clinton), Gary Conille, was fired from the post for undertaking an audit of several reconstruction contracts because they contained information that was damaging to both Martelly and former Prime Minister Jean-Max Bellerive.

With vultures looking to capitalize financially on the reconstruction efforts both inside Haiti and out, a serious overhaul of the reconstruction system is long overdue, but unlikely. The continued neglect of the Haitian state has been the major reason why this cannot be done. At this point in time, a strong Haitian state is the last thing the major donors or politicians like Martelly want, as it would provide oversight and enforce contracts that become bothersome when you are looking to make a quick profit. Instead of helping to rebuild the Haitian institutions like the judiciary, they were bypassed and now face a near impossible task in ensuring integrity and transparency.

Haiti’s failed reconstruction is a clear signal that NGOs cannot replace the state, and that any attempt to do otherwise is destructive and dangerous. The reconstruction effort in Haiti has increased the dependency of the Haitian people through undemocratic and non-transparent projects that serve to entrench the ideals of privatized governance, reduce the role of the state, and free the mobility of both foreign capital and people, while nearly half a million Haitian people stay trapped in the IDP camps. Vast amounts of aid money, which could go to support Haitian grassroots organizations or the Cuban medical missions, are siphoned back to the United States or alternatively spent on expenses for temporary, foreign NGO staffers. Without a doubt, the Haitian people deserve better, yet their oppression continues a pattern that has historically generated profits for the rich, either through slavery, cheap labour, debt bondage, or now as a laboratory for NGO-led development—a politically correct term for money laundering.
Posted by Kevin Edmonds at 2:10 AM