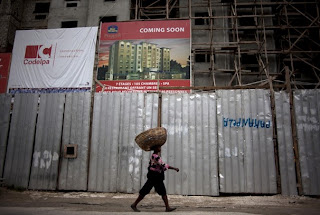 The recent news out of Haiti is that Port au Prince is currently undergoing a building boom—but it’s not the much needed homes for the estimated half million internally displaced people, it’s due to upscale hotels being built to house foreign investors and aid workers. The news is no doubt heavy with contradictions, as the reports optimistically explain that the best way to reconstruct Haiti is to first build infrastructure for foreigners, while the displaced remain in the many sprawling tent camps, vulnerable to disease, eviction, arson, and violence.

The Washington Post reported that “At least seven hotels are under construction or are in the planning stage in Port-au-Prince and its surrounding areas, raising hopes that thousands of investors will soon fill their air-conditioned rooms looking to build factories and tourist infrastructure that will help Haiti bounce back from a 2010 earthquake that officials say claimed 300,000 lives. Some damaged hotels are undergoing renovations.” Some of the new hotels currently under construction include the Clinton-Bush Haiti Fund’s pet project, the Royal Oasis hotel, in addition to a Best Western, Marriott International, and perhaps most controversially, a proposed hotel and conference centre built and maintained by the Red Cross.

The proposed hotel is to be located on part of a $10.5 million property that was purchased after the 2010 earthquake. The organization stated that it hopes that the profits generated from the hotel would sustain the work of Haiti's own Red Cross in the future. Daniel Borochoff, the president of CharityWatch—an organization which monitors and evaluates non-profit organizations said that the plan for the hotel is not only unusual, but also risky due to the chance of the property losing money. Furthermore, Borochoff discussed the fundamental lack of transparency involved in a charitable organization undertaking such a project, remarking that "What would happen if donors learned that instead of giving money to treat cholera or build shelters, it's going to build a hotel? I understand it's an investment, but that takes some explaining."

The $10.5 million that went towards the purchase of the property is highly questionable on many levels, especially when the Red Cross’ primary responsibility is delivering humanitarian assistance during emergencies—and one would think that Haiti’s ongoing cholera epidemic would qualify as such. Without a doubt, the money would be better directed to building permanent housing for those still in the tent camps, or as part of a larger initiative to bring clean water and sanitation services to the most affected areas. The development of such a system is the only sustainable way that Haiti will be able to rid itself of the UN-imported epidemic which has to date claimed more than 7,000 lives.

Looking for news stories detailing any progress in reducing the housing emergency for the Haitian people and not the investors are few and far between, with the most recent announcements by U.S. Ambassador Kenneth Merten about the construction of two housing projects hiding some important details. Ambassador Merten was recently on hand to announce the awarding of two construction contracts to USAID, the first concerning the development of 750 units of earthquake and hurricane resistant, housing on the Caracol-Ekam site in Haiti’s Northern Development Corridor, and 156 units in Cabaret, to the north of the Port-au-Prince.

In a separate article in USA Today, it became much clearer why Caracol-Ekam was chosen as a site for the housing development, as “One of the biggest foreign investments in Haiti is an industrial park under construction in the north that's scheduled to begin garment production in September. The giant $300 million Caracol industrial park will be run by South Korean manufacturer, Sae-A Trading Co. Ltd., and is expected to bring an initial 20,000 jobs to the remote area.”

The vast majority of the 20,000 jobs at Caracol will be low paying, garment assembly positions, where workers will struggle to make a new beginning on $3 per day (the current minimum wage for Haitian sweatshop workers). In many ways the dire economic situation of the half million displaced, in addition to the country’s high unemployment rate provides an unfortunate situation where there is significant competition over these jobs, providing little political incentive to raise the minimum wage.

In many ways, the earthquake created a situation that will lock in the unfavorable conditions that U.S. and Haitian garment manufacturers had been fighting for many years. Wikileaks cables published by Haiti Liberté and The Nation revealed that in 2009, “Contractors for Fruit of the Loom, Hanes, and Levi’s worked in close concert with the U.S. Embassy when they aggressively moved to block a minimum wage increase for Haitian assembly zone workers, the lowest-paid in the hemisphere, according to secret State Department cables.”

The reconstruction effort in Haiti has revealed through the prioritization of upscale hotels and housing for sweatshop workers that it is not about addressing the needs of the vulnerable first, but of wealthy multinational and Haitian investors first, and perhaps the people a very distant second, only if profitable and convenient. With the team of Bill Clinton, who helped to destroy the Haitian rice industry, and Caribbean agriculture more generally—and George Bush, whose economic track record speaks for itself—it becomes more clear that the reconstruction effort in Haiti is faithfully following trickledown economic policies that have worked wonders in increasingly inequality across the globe.

Posted by Kevin Edmonds at 6:13 PM