It’s one thing to be proud of an accomplishment, such as reducing the amount of homelessness by constructing homes—but it is irresponsible and criminal to attack, forcefully evict, and destroy thousands of shelters consisting of battered tents and tarps, then brag internationally about seeing a reduction in the levels of visible homelessness. Yet this is exactly what is happening right now in Haiti. Unfortunately the forced eviction of the internally displaced not a new phenomenon. If this is the way success is measured by the Haitian government and the International Organization of Migration (IOM), it should come as no surprise why some of Haiti’s most vulnerable are increasingly protesting their living conditions and the constant threat of eviction.

This week, 1,000 frustrated Haitians marched through the streets of Port au Prince demanding that the government take action to alleviate the on-going housing crisis. The spark for the protest was the announcement by Pierre Andre Gedeon, an official with the Environment Ministry, who stated that the government “wanted to demolish several hundred homes to build channels and reforest the hillsides in an effort to curb flooding in the annual rainy season.” 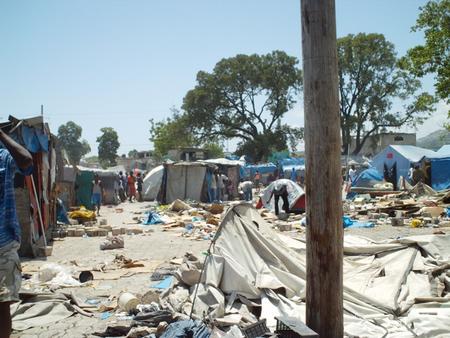 While Port au Prince is certainly in dire need of reforestation and infrastructure projects, the way to move forward is not to intensify the housing crisis by evicting the homeless without a plan, but rather to work to construct homes in suitable areas so that the hundreds of thousands who lost everything in the earthquake can have a chance to lead safe and healthy lives.

The shelters targeted by the government for demolition sprung up in the hillsides of Jalousie largely as a result of prior forced evictions and failed resettlement initiatives. It is a community of people who have been victimized by their government, aid organizations and nature—but unfortunately they are not the only ones.

Earlier this week it was announced by the IOM that the number of internally displaced people had fallen to just under 400,000—down from the peak of 1.5 million after the earthquake.

At the surface the story might sound like a momentous achievement, but the most important part of the story was missing. While announcing the reduction of the internally displaced, there were no accompanying announcements about the completion of significant housing projects—at least for the Haitian people anyway. Wednesday’s protests were a sharp example of this growing contradiction surrounding housing in Haiti, where one of the participants remarked that "Martelly didn't build any houses. How can he destroy our homes... If he comes to destroy our homes we're going to burn down Petionville."

The anger of the protestors is more than justified because since his inauguration over one year ago, President Michel Martelly has continuously made empty promises to Haiti’s vulnerable about the construction of free housing, yet nothing has emerged. However, at the same time there have been thousands of forced evictions in both public and private spaces often carried out by the Haitian police (illegal under international law)—at the behest of the government and local land/business owners. Martelly has shown that he and his administration have been much more effective at destroying the lives of Haiti’s poor and vulnerable than rebuilding them.

It is not as if the forced evictions have gone unnoticed by the international organizations entrusted to help Haiti get back on its feet either. Shortly after the earthquake, in September 2010, a report commissioned by UN Secretary-General Ban Ki-Moon estimated that “29% of the 1,268 camps studied had been closed forcibly, meaning the often violent relocation of tens of thousands of people.” Despite these initial statements of concern, very little has been done to prevent forced evictions, as the 12,000 strong United Nations Stabilization Mission in Haiti (MINUSTAH) has been totally ineffective at stopping the evictions or securing the camps.

An October 2011 survey by the University of San Francisco School of Law revealed that 34 percent of dis­placed per­sons reported leav­ing their camps because they were forced out by evictions. The same survey concluded that “it is likely that many dis­placed fam­i­lies who left the camps were unable to find sus­tain­able hous­ing and are liv­ing in con­di­tions even worse than those found in camps.”

Furthermore, a January 2012 report by Amnesty International stated that “Increasingly, displaced Haitians have reported tactics being used to coerce them into leaving the camps they have inhabited since the 2010 earthquake, including cash bribes and threats by plain-clothed security forces or armed groups.”

As such, it appears that those who lost everything in the earthquake have no safe haven in Haiti, as we are witnessing what largely amounts to gentrification in Haiti. The clearing of the makeshift camps on the hillsides, and the prioritization of 5 star resorts did not go unnoticed, as Monday’s protest also involved rocks being thrown at the hotel financed by the Clinton Bush Haiti Fund as an expression of their anger regarding the unbalanced reconstruction agenda.

Thus more than two years after the earthquake, it appears more than ever that assistance to victims is not a real priority. It must be because the construction of homes for the displaced is not as lucrative as the construction of sweatshops or walled resorts. It is the same reason why the reconstruction of basic public education and health systems have been largely neglected. Haiti is being reconstructed from the top down largely for the benefit of domestic and international investors, but it can only be a matter of time before the lopsided effort totally falls apart. Without a doubt, the failure will be portrayed as a victory, as those given the responsibility of rebuilding and helping Haiti heal have had a great deal of experience of confusing one with the other.

Posted by Kevin Edmonds at 5:18 PM