On January 11, 2012—the eve of the second anniversary of the devastating 2010 earthquake—Beverly J. Oda, Canada’s former Minister of International Cooperation announced that the Government of Canada would be committing $19.9 million to the resettlement of 5,000 families (approximately 20,000 individuals), who were left homeless and were living in the internally displaced camp in Champs de Mars. The Canadian government would lead the resettlement initiative, in partnership with the International Organization for Migration (IOM). 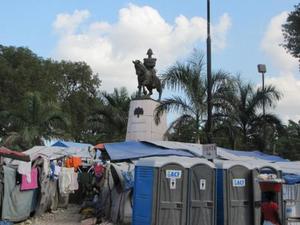 "Canada is proud to be a part of the international efforts to help Haiti as it recovers from the earthquake over the past two years. We are fulfilling our commitment to the Haitian people so they can move forward to building their communities and their country," said Minister Oda. "The Champ de Mars project is a comprehensive Canadian initiative that focuses on the future of Haitian families and businesses as well as restoring a national landmark and place of pride for all Haitians as a public park for all to enjoy."

The website for the Canadian International Development Agency outlined that the Housing Action Project in Champs de Mars would respond “to a critical need expressed by the Government of Haiti: the resettlement of persons displaced by the 2010 earthquake through the offering of sustainable housing solutions.”

The definition of a sustainable housing solution seems to be what is causing the most controversy, as the clearing of camps such as Champs de Mars has coincided with an intensification of the housing crisis in Haiti. In the spirit of “anything is better than nothing,” the solution proposed by the Canadian government and the IOM was the one-time distribution of $500 in order to rent a place to live for a year.

In an interview with the Washington Post in February of this year, Emmett Fitzgerald of the IOM talked about their idea of a sustainable housing plan, stating that “We’re not talking about a house. We’re talking about renting a room, space on the floor, with a roof, access to water, a communal kitchen, maybe a toilet.”

With such a course of action proposed as a solution, it must be asked whether or not the program run by the Canadian government and the IOM will just postpone the housing crisis for the 20,000 individuals for another year. What will happen when then when the money runs out in the summer of 2013? It is hardly the stuff of a “sustainable housing solution.”

The lack of sustainability of the program didn’t seem to faze Fitzgerald however, who stated that “Giving cash to people to move, when integrated within a reconstruction and recovery plan, can be a very effective method,”

Sounds good, but as it stands there is no integrated reconstruction and recovery plan, especially when it comes to addressing the housing crisis in Haiti.

“Two years after the earthquake there is still no policy in terms of housing. The vast majority of construction has been temporary shelters with a life span between two, maximum five years. There’s no plan, no strategy to make temporary shelters more permanent structures and provide people with access to basic services like water,” said Gerrardo Ducos, of Amnesty International.

This is precisely the reason why the Under Tents campaign came to be, as “Haiti’s homeless are demanding that the government immediately halt all forced evictions until public or affordable housing is made available. They request that the Government of Haiti, with the support of its allies and donor governments in the United States, Canada, and Europe move quickly to: (1) designate land for housing, (2) create one centralized government housing institution to coordinate and implement a social housing plan, and (3) solicit and allocate funding to realize this plan.” 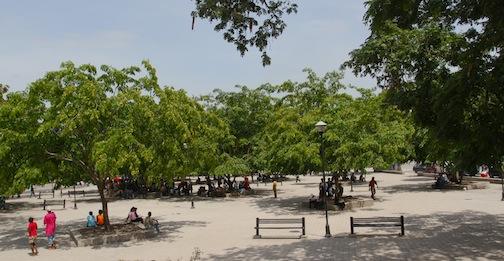 6 months after Oda’s announcement, as the photos reveal, Champs de Mars is now clear of the battered tents and tarps, where thousands lived in unsafe, unsanitary conditions. While the contrast between the before and after photos looks impressive, the reality is that Haiti’s housing problem has not been solved, it has merely been swept outside of the immediate city core. 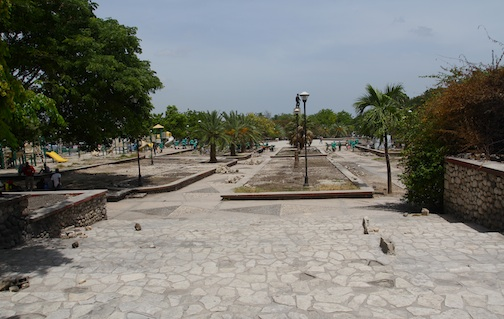 Squatter settlements created by those who have been evicted under such resettlement plans have sprung up on the hillsides of Port au Prince, as well as on its outskirts. According to Mark Schuller, an anthropologist working in Haiti, many of the informal camps such as “Kanaran, a long stretch of desert land in the outskirts of town, is still growing—no one knows how many people live there. I've heard estimates of 130,000 to 180,000 people, but IOM has never done a census... HANCHO, Karade, and Kolonbi are already well on their way to becoming shantytowns, the Cité Soleils of the next generation.”

One can only hope that the presently unsustainable nature of the project will not result in a backlash preventing the funding of real housing solutions for Haiti in the immediate future. At the start of the “sustainable” housing campaign, Oda remarked that “If all we do is clear the Champ de Mars, we will have failed”—yet this is exactly what has happened. The clearing of Champs de Mars camp may be held up as a sign of progress by many, when it should really stand out as a dangerous example that simply relocating the problem of housing in Haiti will not solve, but only intensify, the dilemma.

Posted by Kevin Edmonds at 8:11 PM