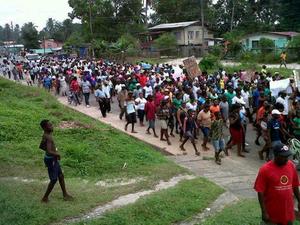 This year in Guyana, Emancipation Day—the day which commemorates the abolition of slavery—was not a cause of celebration but was marked instead by widespread sadness and anger. On August 1, the funerals of three men—Shemroy Bouyea, Ron Somerset, and Allan Lewis—were held, as all three men had been shot dead by Guyanese security forces during a protest regarding government plans to increase electricity rates in the bauxite mining town of Linden.

Almost two weeks earlier, on July 18, the men were part of a large, ongoing protest calling for Guyanese President Donald Ramotar to reverse his decision to increase electricity rates in the community. Opposition to the issue of increased electricity tariffs is not something new in Linden as former President Bharrat Jagdeo tried to implement similar reforms in July 2008 but eventually backed down due to widespread community opposition.

While the proposed increase of electricity rates is cited as the main cause of the protests in Linden, they are also about the problematic lack of jobs and opportunity in the community. Professor Alissa Trotz of the University of Toronto, a Guyanese national, is well aware of this reality, stating that Linden has some of the highest unemployment rates in the country, with estimates going as high as 70 percent.

As with much of the politics in racially divided Guyana—the happenings in Linden have not occurred without their share of controversy and blame. Linden is predominately Afro-Guyanese and is widely considered a base of opposition to Ramotar’s People's Progressive Party (PPP) government, also considered to be the party of the Indo-Guyanese population.

It did not take very long for the happenings in Linden to become highly politicized, with the state owned Guyana Chronicle seeing the protests in a much different light, unapologetically stating that the protestors in Linden are “blackmailing the government to continue to provide free electricity to that region.”

The day after the shootings, the Guyana Chronicle published an inflammatory article congratulating the officers for opening fire on the protest, stating “Kudos to our police which did their duty at great risk to the lives of ranks. You stood your grounds in the face of much provocation and danger and you did your duty to protect the peaceful citizens of Guyana and Guyanese once more say thanks.”

Instead of using his public addresses to urge for an atmosphere of calm and reconciliation, Ramotar chose to engage in a politically unwise tactic, deflecting the negative attention away from his administration as the government has blamed the events in Linden as the work of opposition parties looking to destabilize the government.

Supporting this position, the Guyana Chronicle wrote that “The professional protesters, who seem to be suffering from a syndrome of attention deficit, have predictably been used as pawns by the opposition collective of leaders to sow the seeds of insurrection.”

The comments no doubt have done a great deal to ferment deeper opposition to Ramotar’s government.

As evidence of this growing unrest, on August 10, an office housing several government entities, including the Guyanese Revenue Authority, was burnt to the ground. Also housed in the building was the office of the Linden Electrical Company. Police reported that attempts have also been made to burn down the Wismar-Mackenzie bridge, a vital crossing point into Guyana’s interior regions.

Perhaps an even more troubling and tragic sign, the Ministry of Education has confirmed on Sunday that the One Mile Primary School in Linden was also the target of arson, leaving the 830 children who attended it in a very difficult situation. The Ministry of Education was rightfully harsh in their comments on the targeted school stating that “Every peace loving person and citizen who recognises education as a necessary tool for poverty alleviation must condemn the burning of schools immediately. There can be no ifs and buts and conditions. This is wrong, will affect our innocent children, will create grave hardship for all involved, and must be unreservedly condemned.”

Perhaps now realizing that their immediate and harsh response to the protests were not the best course of action, the government is now putting forth a less abrasive argument, maintaining that its position to increase the electricity rates in Linden is not an attack on the people of Linden but rather to bring the rates on par with what the rest of the country is paying—and thus did not warrant such a reaction. However, even this latest statement from the government is being criticized for its inaccuracy and distortions.

In an effort to set the record straight and counter the charges that the Lindeners are demanding free electricity, according to research conducted by Stabroek News’ Christopher Ram, the population of Linden should not be subject to an increase in tariffs as they are not on the Guyana Power and Light grid. Instead, Linden’s electricity supply is provided from the nearby Chinese owned Bosai Minerals Group, which currently runs a bauxite mining operation in the vicinity.

Due to the ongoing protests, Bosai Minerals Group has reported that its mining operations have become paralyzed due to the blocking of the roads going in and out of Linden, losing millions of dollars as a result of their inability to keep up with its international obligations. One article has even talked of Bosai moving out of Guyana due to the situation—or at the very least halting its expansion plans within the country.

As part of the incentives granted to Bosai into Guyana, it was reported that the company is not paying its share of royalties. The same report by Ram states that “In the three years 2008 to 2010, the bauxite companies exported some 4,659,317 tonnes of bauxite with an exchange value of US$325.2 M. For this, the country received no royalties.”

Considering the research done by Christopher Ram, it would appear these statements are simply posturing on the part of Bosai, because as it stands they are involved in a very sweet deal in Guyana. Based on this, it can be assumed that Bosai is making such statements in order to urge the government to take action to end the crisis in Linden.

The Inter-American Commission on Human Rights has denounced the actions of the Guyanese security forces, reminding the government of their obligation to conduct a judicial inquiry into the deaths of the three men and hold those who pulled the trigger, as well as those who gave the orders, accountable.

Fortunately, in response to both community and international pressure, an investigation is currently underway as to why the officers were equipped with live ammunition, rather than the traditional “birdshot” used to disperse crowds. According to coroner reports, it can be assumed that the police were shooting to kill as two of the men were shot in their heart and one in the back by copper-coated ammunition. Eyewitnesses to the shooting reported that the officers opened fire upon the protestors from only 15 feet away, injuring more than 20 men and women in the crowd.

The protests in Linden regarding the electricity hikes have now understandably turned to calls for justice, demanding that murder charges be laid against the officers responsible for shooting the unarmed protestors. Demerara Waves has reported that “Region 10 Chairman Sharma Solomon says Lindeners are gearing up for a massive demonstration in the streets of the still-restive town next week to mark one month since the shooting deaths of three protesters in the mining community on July 18.”

The Guyana Police Force is maintaining a very heavy presence in Linden, in what it calls “Operation Final Push”—working to clear the roads and stop the arson which has been plaguing the community. Without any solutions to the deeper problems facing Linden, it is hard to imagine that the protestors will give up their demands for justice quietly after all that has happened on both sides. How the government handles the situation now will be crucial, as it has the potential to cause a negative backlash not only throughout Linden, but across the country. According to Solomon, the approach taken by the government will not work, as “No military action is going to bring this matter to an end because people have resisted and they said they will continue to resist.”

Posted by Kevin Edmonds at 3:50 PM No comments: