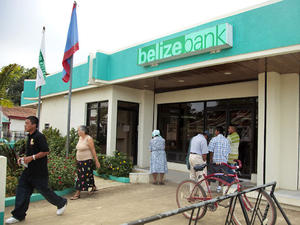 On September 21, Belize won a 60-day reprieve after a partial debt payment of $11.7 million, which avoided their descent into a full blown default. With a population of 330,000 people, the Central American nation known for its ecotourism has a government debt of $1.1 billion. Prime Minister Dean Barrow has laid out three proposals for rescheduling its bond payments, resulting in creditors being asked to write off 45 percent of their investment, or spread payments out over 50 years, with a 15-year grace period and interest of two percent, down from the current 8.5 percent. While this would hardly shake global financial markets, such a move would be unlikely for Belize, which has been hit hard by increasing poverty due to sluggish economic growth.

Ecotourism has come to dominate the majority of Belize's economy, providing the bulk of the country’s revenue. Despite tourism arrivals being at their highest ever levels, the tourism consultants (aka developers) are encouraging the government of Belize to lower their taxes to increase competitiveness. With Belize permitting 100 percent foreign ownership of properties and enterprises, 90 percent of the most desirable coastal properties are now foreign owned. Furthermore, 65 percent of the Belize Tourism Industry Association are not locals but rather expatriates from the United States. As a result, a great deal of the profits are funneled out of Belize, reducing the economic impact of the tourism industry locally, in addition to reducing the government’s ability to access sources of taxation.

In addition to the foreign ownership of the tourism industry, the descent of Belize’s economy is also in part due to the reaction of the international finance community to the recent nationalization of both the electric and telecommunications companies. These moves triggered Standard and Poor’s to further downgrade Belizean bonds, “citing concerns about the Central American nation’s debt”—and severely impacting investor confidence. The Heritage Foundation also criticized Belize for “dimming the lights on economic freedom,” calling for the Obama administration to act decisively to reverse the “assault by a Chavista government on the market of a NAFTA partner country.” In a shining example of their blind ambition for foreign control in Belize no matter the cost, the right wing think thank stated that the events in Belize “calls to mind the Administration’s weak response to a similar power grab in neighboring Honduras when Chavez ally and ex-President Manuel Zelaya tried to become president-for-life.”

Earlier this month, representatives from the International Monetary Fund met with Caribbean governments—including Belize—in Trinidad to discuss the challenges related to the low growth and high debt which plague the region. Once again preaching for more of the same economic policies which decimated the region, the IMF stated “Decisive reforms to boost competitiveness and private sector investment are of the essence. In particular, policymakers are encouraged to continue focusing on lowering relative (domestic vs. foreign) costs of goods and services to foster exports and reduce external current account deficits. Reforms to address structural impediments will also help in that regard. Although the implementation of such reforms is challenging in the short term, in the long run they could bring undoubted benefits for the economies of the Caribbean and help create jobs.”

Belize, like much of the Caribbean, is trapped between high debt and a foreign economic environment hostile to the implementation or increase of taxes or tariffs. As such, the only recourse is for already cash strapped governments to cut down on what little social services remain. According to the U.S. State Department, Belize is the sixth most dangerous country in the world and is now unfortunately breaking previous national records for violent crime year after year. As documented, the relationship between the IMF and Belize has been one where prior modest economic growth has not resulted in a decline in poverty or inequality.

Thus, without breaking from the IMF's plan through implementing any tax increases or a favorable renegotiation of their debt, the people of Belize will bear the burden of this crisis through declining living standards and opportunities. One has to think that with the failure of either option to materialize—given the makeup of Belize's economy being dependent on tourism, oil, and agriculture—would it be in the greater interest of Belize to default and focus on shifting money towards health and education? Would tourists place the honoring of loan conditions above snorkeling, jungle hiking, and drinking bottomless rum and cokes by the pool? It is doubtful. Perhaps after the 60 day reprieve passes the answer will become much more clear but no less easier to undertake.
Posted by Kevin Edmonds at 1:57 PM