MINUSTAH’s Upcoming Renewal: A Setback for Democracy in Haiti 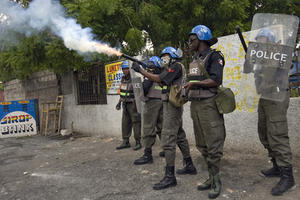 Despite widespread opposition from the Haitian people and many of their political representatives in parliament, the renewal of the United Nations Stabilization Mission in Haiti (MINUSTAH)’s  mandate is set to occur on October 15.

Supporters of MINUSTAH, such as the International Crisis Group’s Mark Schneider, argue that “when I recently met with government and business leaders and their adversaries, everyone acknowledged one simple fact: Haiti’s limited police force—in numbers and capacity—cannot protect its citizens without UN backing. Until Haiti builds a stronger, more capable law-enforcement structure—and one hopefully is in the making—the resulting vacuum would almost inevitably lead to spoilers seeking to secure their goals through gun barrels rather than ballot boxes.”

Standing in contradiction to this, a January 2012 study by Mark Schuller showed little popular support for MINUSTAH, stating that “the sur­vey of over 800 house­holds through­out Port-au-Prince shows that less than a quar­ter of respon­dents con­sid­ered that the pres­ence of the U.N. Sta­bi­liza­tion Mis­sion in Haiti (or MINUSTAH) is a “good thing” while a major­ity feel that the troops aren’t pro­vid­ing ade­quate secu­rity. A large per­cent­age (43.9%) of respon­dents believed that MINUSTAH agents are or have been engaged in crim­i­nal activ­i­ties such as vio­lence, theft, and rape.” Additionally, the study revealed that “More than a fifth of sur­vey respon­dents (21.2%) said they wanted MINUSTAH to leave Haiti 'now,' while an addi­tional 22.2% would like to see the troops leave within a year. Only 5.9% of respon­dents said they do not think MINUSTAH should leave Haiti.”

Furthermore, a February Security Council Report argued that Haitian “Parliamentarians shared frank and mostly critical views on MINUSTAH. They called for the mission to compensate cholera victims and to swiftly punish those within MINUSTAH responsible for incidents of sexual exploitation and abuse of Haitians.”

While strengthening the rule of law and establishing a civilian police force are certainly necessary steps for Haiti, MINUSTAH is supporting the establishment of a system in opposition to the popular demands of democracy and inclusion.

At his last address to the United Nations Security Council in April 2011, former President Rene Preval stated that the dangers of violent confrontation in Haiti were over and that "peacekeeping operations did not quickly enough adapt to the new situation" and questioned the need for an additional renewal of a military mission in a country that has had no war. He went on to argue that "Tanks, armed vehicles, and soldiers should have given way to bulldozers, engineers, more police instructors, and experts on reforming the judicial and prison systems.”

While MINUSTAH justifies itself by claiming to protect the Haitian people from violent criminal gangs, they often confuse them with student groups. WikiLeaked cables from 2006 revealed that “MINUSTAH had focused over the past several weeks on attempting to identify elements among [a student] group that posed a threat to its mandate.”

On May 25, 2010, after MINUSTAH troops used tear gas and rubber bullets to break up anti-MINUSTAH protests by university students, they quickly entered the university to arrest student leader Frantz Mathieu Junior. The student hid in a washroom, but the soldiers chased him and kicked down the door. According to investigative journalist Ansel Herz, “Junior said he was forced to the ground and kicked repeatedly, then taken away. He says he was force-fed while in detention.” The rubber bullets and tear gas were also fired into camps of the internally displaced peoples, resulting in injuries of several women and children.

On September 14, 2011, MINUSTAH tear gassed another student demonstration in Champs de Mars. The students were calling for an end to MINUSTAH’s occupation and also for an end to the mission’s impunity in regards to ongoing charges of sexual abuse and for introducing cholera to the country.

Most recently, on June 15, 2012, MINUSTAH soldiers tried three times to enter the School of Humanities (FASCH) of Haiti’s State University, which left several people wounded by gunfire and many other students assaulted with teargas grenades.

In addition to attacking and suppressing student protests, we are seeing President Michel Martelly follow a slippery slope towards dictatorship with MINUSTAH standing right beside him. In October 2011, Martelly ordered the illegal arrest and imprisonment of Deputy Arnel Bélizaire, an outspoken critic of the President, after he returned to the Toussaint L’Ouverture International Airport. At hand to help with the illegal arrest were members of the Haitian National Police (PNH) and MINUSTAH soldiers.

MINUSTAH's strong support for Martelly goes back to the earliest moments of the presidency. While MINUSTAH’s mandate outlined in Resolution 1542 states that one of its primary goals is “to support the constitutional and political processes; to assist in organizing, monitoring, and carrying out free and fair municipal, parliamentary, and presidential elections,” it raised no objections to the well-documented electoral irregularities during Martelly's election in November 2010. Despite the UN’s wish for “transparent and credible elections,” MINUSTAH’s blind eye towards the exclusion of political parties, voter fraud, and counting irregularities provided political legitimacy in what amounted to the systematic exclusion of a majority of the electorate.

On September 28, 2012, the Chief Prosecutor of Port-au-Prince, Jean Renel Sénatus, publicly discussed his dismissal by the Ministry of Justice because he refused to implement an order to arrest 36 political opponents, including the lawyers Mario Joseph, Newton St-Juste, and André Michel. Mario Joseph is one of Haiti’s most prominent human rights lawyers who is currently involved in a lawsuit against the UN for their alleged involvement in introducing the cholera epidemic to the country. He is also a leading prosecutor in the case against former dictator Jean Claude Duvalier. Newton St. Juste and Andre Michel have respectively brought up corruption complaints aimed at the President, his family, and members of his administration. When questioned about the threats and political intimidation aimed at Joseph, the United Nations remained silent on the issue, only stating that "we're certainly aware of the report... if I have anything further on that, I'll let you know."

It is troubling that while MINUSTAH calls for the rule of law to be implemented in Haiti, they are silent when one of the legal system's strongest advocates—Mario Joseph—is threatened. Furthermore, instead of encouraging democratic expression by students—the future leaders of Haiti—they allow MINUSTAH to silence them with tear gas and bullets. The reality is that if Haiti did have a strong judicial and democratic system, MINUSTAH would not be able to get away with the routine human rights abuses they commit. MINUSTAH has had over 8 years to strengthen the judicial system in Haiti and reform the Haitian National Police, but instead it has spent the majority of its money on bullets, not books and education.

We should not be surprised with this hypocrisy however, because MINUSTAH has been exposed as being opposed to the establishment of genuine democracy in Haiti. As Mark Schneider candidly admitted in an earlier quote, Haitian business leaders (and not the people) are strong supporters of MINUSTAH. In October 2008, WikiLeaks cables revealed that former U.S. Ambassador Janet Sanderson saw that “A premature departure of MINUSTAH would leave the [Haitian] government...vulnerable to...resurgent populist and anti-market economy political forces—reversing gains of the last two years,”  and that MINUSTAH “is an indispensable tool in realizing core USG [US government] policy interests in Haiti.”

While indispensable for the U.S. government and local business interests, it remains diametrically opposed to any effort on behalf of the popular democratic movement. Thus the renewal of MINUSTAH's mandate on October 15 should not be regarded as a step towards increased security and stability in Haiti but rather an investment in the suppression of popular pro democracy forces.
Posted by Kevin Edmonds at 5:19 PM