Obama's Election and the Caribbean: What Does it Mean? 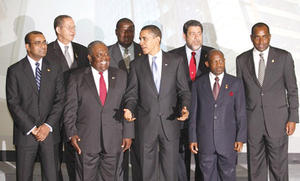 Early Wednesday morning the Caribbean breathed a sigh of relief with the re-election of Barack Obama. A Romney victory would have ushered in a period of uncertainty, as it was expected that he would pursue a more aggressive stance towards Cuba and other left leaning governments in the region. During the debates however, it became apparent that Latin America and the Caribbean was not an area of deep concern for either candidate as the foreign policy discussion was intensely focused on matters relating to the potential conflict with Iran, security in post-Gaddafi Libya, Israel/Palestine, Syria and the trade imbalance with China.

While Caribbean Prime Ministers immediately extended their congratulations to Obama, their expressions of cautious optimism also came with calls for more meaningful engagement with the region. For example, Dominica’s Prime Minister Roosevelt Skerrit sent his congratulations to Obama, remarking that “The relationship between the United States and Dominica continues to be strong, based on mutual respect...we work very diligently on matters relating to regional security and we look forward to advancing those efforts. Clearly, the U.S. focus is on anti-terrorism matters and they moved away from issues relating to development in the region. But I am hoping that the new term of President Obama there would be some kind of re-direction towards developmental issues.”

During his first term, Obama’s most significant interaction with the region came in the form of the Caribbean Basin Security Initiative to combat the growing influence of the drug trade. While sounding familiar, this should not be confused with the Caribbean Basin Initiative. In 1984, the Reagan administration implemented the first Caribbean Basin Initiative to stem the tide of leftism in the region—characterized by the Grenadian Revolution of 1979—by offering financial aid and development assistance. A key pillar of the initiative was export diversification in the region, but this consisted primarily of relocating export processing plants for textiles and apparel industries to the Caribbean.

Obama formed the Caribbean Basin Security Initiative during the Fifth Summit of the Americas in April 2009, when he announced an investment and partnership with the Caribbean toward strengthening regional security. In the first two years of the initiative, the Obama administration invested $139 million which went towards training scouting aircraft and boats, police polygraphers, improving prisons, and training police. Despite the initiative claiming to work on “increasing educational opportunities and providing workforce development and entrepreneurship training for at-risk youth,” very little has been done of this aspect of the program.

During Obama’s first term there were no clear signs that the antagonistic relationship between Washington and Havana was going to change. Evidence of this could be seen by the U.S. State Department keeping Cuba on their list of “State Sponsors of Terrorism.” Despite this irresponsible categorization, Obama introduced small changes—specifically easing the restrictions on Cuban-American travel to the island and increasing the amount of remittances they can send back home. The increased flows of remittances have been pointed to as a key source of financing for the small businesses that are now sprouting up in Cuba under Raul Castro’s economic reforms. Next week at the United Nations General Assembly, Cuba will submit a draft resolution titled “Necessity of ending the economic, commercial and financial blockade imposed by the United states of America against Cuba.” It is universally expected that the United States will veto the resolution for the 21st consecutive year.

In regards to Haiti, U.S. policy has maintained the status quo of empowering international capital at the expense of the Haitian people’s livelihood and self determination. At the opening of a controversial $300 million industrial park (sweatshop) in an ecologically sensitive zone far outside of the area damaged by the earthquake, U.S. Secretary of State Hillary Clinton remarked that “When I became Secretary of State, I looked at the billions of dollars of foreign assistance that the United States spends around the world and I asked myself why the results didn’t always create meaningful and sustainable change in the lives of people .… So we redirected our efforts to work with Haiti, not just in Haiti.”

A sign of the sustainable priorities envisioned by the United States and the Bill Clinton-led Haiti Recovery Commission is their focusing on constructing low wage assembly plants and totally ignoring Haiti’s education system. After the earthquake the State University of Haiti was severely damaged, but two years later classes are still taking place in sheds and under tarps. Haiti Grassroots Watch revealed the troubling priorities of the commission, which noted that the State University submitted a reconstruction contract to the Clinton-led commission in early 2011 which was ignored, while the Clinton commission offered $914,000 to the private Quisqueya University to open a Center for Entrepreneurship and Innovation.

While the Caribbean has fallen off of Obama’s radar, it has allowed non-traditional political forces such as China and Venezuela to exert their influence in the region. Over the past ten years, China has gradually made inroads into the region and has now become one of the Caribbean’s largest sources of development projects, trade, and preferential lending. The Chinese Government’s first-ever policy paper on Latin America and the Caribbean, written in 2008, stated that “As the largest developing country in the world, China is committed to the path of peaceful development and the win-win strategy of opening-up. It is ready to carry out friendly cooperation with all countries on the basis of the Five Principles of Peaceful Coexistence and build a harmonious world of durable peace and common prosperity.”

Furthermore, the countries of the Eastern Caribbean are seeking out alternative alliances with the Venezuelan and Cuban influenced Bolivarian Alliance for the Americas (ALBA). ALBA is an international co-operation organization based on the idea of social, political, and economic integration between the countries of Latin America and the Caribbean. It is associated with socialist and social democratic governments and is an attempt at South-South regional economic integration based on a vision of social welfare, solidarity, and mutual economic aid. Immediate benefits from ALBA include reduced oil via the PetroCaribe program, infrastructure grants, and investments in social services.

While the Bush-era will be remembered for backing violent intervention in Venezuela in 2002 and Haiti in 2004, it must be remembered that the coup which ousted the democratically elected President of Honduras, Manuel Zelaya occured on Obama's watch. Despite initially calling the coup which brought Porfiro Lobo to power illegal, Obama quickly moved on to recognize the regime, praising Lobo for his "strong commitment to democracy" in 2011. Additionally, Obama has been silent on the parliamentary coup which removed Paraguay's democratically elected President Fernando Lugo from power in June.

It remains to be seen whether or not Obama will shift to a more development focused approach in the Caribbean, but based on his past actions it remains doubtful that meaningful change will occur. However, the shift to a less antangonistic, more hands off approach comes with both new problems and possibilities for change through new alliances and spaces for policy development in the Caribbean. Given the troubling history of intervention, destabilization, and the steadfast implementation of neoliberal economic policies, perhaps giving the Caribbean its own space to decide their future and chart their own political and development priorities is what exactly what they need.
Posted by Kevin Edmonds at 6:15 PM