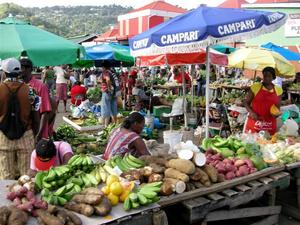 “Make no mistake about it. Our region is in the throes of the greatest crisis since independence. The specter of evolving into failed societies is no longer a subject of imagination. How our societies crawl out of this vicious vortex of persistent low growth, crippling debt, huge fiscal deficits, and high unemployment is the single most important question facing us at this time. Indeed, if CARICOM (the Caribbean Community) wishes to be relevant to the lives of the people of the region, then that issue should dominate its deliberations at the next summit. CARICOM cannot be seen to be impotent when societies and economies are at risk, on the brink of collapse.” These were the words of Dr. Kenny Anthony, Prime Minister of St. Lucia to a meeting of the Barbados Chamber of Commerce and Industry on October 31.

While fighting an uphill battle in an unfriendly global economic environment, a key part of the Caribbean’s socio-economic descent has to with the collective failure to take the necessary steps to integrate the region and find alternatives to support agricultural production. Due to the dictates of World Trade Organization (WTO) which dismantled protected trade agreements with Europe, a great deal of the Caribbean agricultural industry was left for dead. It was assumed that due to economies of scale the Caribbean was producing agricultural goods in an inefficient manner and that they should free up their human resources to focus on areas in which they held a “comparative advantage” (i.e. tourism or offshore financial services—which catered to powerful interests).

This feeling was so pervasive that in the late 1980s U.S. Secretary for Agriculture John Block argued that “The idea that developing countries should feed themselves is an anachronism from a bygone era. They could better ensure their food security by relying on U.S. agricultural products, which are available, in most cases, at much lower cost.”

Much to the surprise of the expert economists, the comparative advantage to replace agriculture never showed up. The small farmers of the Caribbean were forced into redundancy and the results are telling. During the start of the U.S. led “Banana War” at the WTO twenty years ago the countries which form CARICOM produced a net agricultural surplus of roughly $3 billion; today CARICOM’s food import bill stands at $3.5 billion per year. The loss of agricultural jobs contributed significantly to the sharp rise in unemployment, poverty, and hunger, with it also contributing to a sharp decline in government revenues. Furthermore, according to Ryerson University’s Center for Studies in Food Security much of the newly imported food is harmful, as “nutrition-related, chronic non-communicable diseases such as obesity, diabetes, and hypertension are the main causes of disability, illness, and death in the region”.

Given that the Caribbean is one of the most fertile regions on the planet and that it was colonized primarily for agricultural reasons, the fact that most of the Caribbean countries are now designated as Net Food Importing Developing Countries—meaning that they cannot grow their own food—is highly problematic. While this is predominately due to the actions of the WTO, World Bank, International Monetary Fund, and bi-lateral loan conditions, the Caribbean leaders must take responsibility as well for not moving fast enough to build new links in the agricultural sector and reduce vulnerability due to high levels of food insecurity.
However, the delay on diversification should not be considered as a very recent phenomenon, as many Caribbean dependency theorists and progressive politicians also warned about the ongoing overreliance of the region on outward oriented protected trade agreements. Expressing the demand for greater economic self determination, diversification, and shift away from unequal trading, during the short lived St. Lucia Labour Party government of Allan Louisy, Winston Cenac and George Odlum remarked that:

“We (St. Lucia) have inherited our export economy in which the very operation of the economy was geared to external and not domestic demands and needs. The best resources in our country were utilized for producing the export staple .... Whatever resources remained, which were both few in both quantity and quality, could not satisfy our domestic requirements. The result was a large import bill and a disincentive to local production fostered by an attitude which maintained that foreign goods or anything with a foreign label was superior to our local products. The basic problem associated with the import/export economy lay also with the nature of our exports and imports. Our exports are primary products like bananas which suffer from the vagaries of the weather and sensitivity of their prices to factors outside our control .... Our imports, on the other hand, are high valued goods, covering every category from food to capital goods.”

The new service oriented direction that the Caribbean was forced into was not much different from the unequal trading terms which existed under agriculture. Looking at the nature of the tourism industry for example, in all inclusive resorts, all guests pre-pay for their visits, and such a great deal of the money does not come into circulation in the local economy. In addition, a great deal of the food is imported, as seen by the 2006 Caribbean Hotel and Tourism Association study titled The Caribbean Accommodation Sector as a Consumer of Locally Produced Goods and Contributor to Government Revenue, which revealed that less than 20% of fresh fruit, fish, and eggs were acquired locally. Furthermore, a 2008 World Bank study titled OECS Increasing Linkages of Tourism with Agriculture, Manufacturing, and Service Sectors which showed that food imports for the tourism sector were estimated at a value of US$366 million, representing 20-25% of total agricultural imports.

While many Caribbean economies were overdependent on protected banana exports, the banana industry was highly regarded for the levels of economic growth due to what economists refer to as the “multiplier effect.” Bananas affectionately became known as “Green Gold” amongst the small farmers, as the steady prices enabled them to raise their humble standard of living. Due to the nature of the banana industry, the farmers spent their income in the local economy, creating spinoff jobs, which leads to more spending and the cycle continued.

While the United Nations has announced that the Caribbean is geographically unable to provide 100% food security, Belize Guyana and Suriname, with comparatively larger land masses, can do a great deal to reduce the region’s vulnerability. There are some small slivers of hope, as last month, Guyana and Trinidad announced the creation of a food-security facility with hopes of increasing agricultural and livestock production, reducing dependence on foreign food imports, and at the same time encouraging the regional goal to reduce food insecurity in CARICOM by 25% by the year 2015. Jamaica has recently announced in April that it would be launching a $150 million, 2,000 acre rice cultivation project. These are all promising steps in the right direction.

While refocusing on agriculture will not be a salvation in and of itself, it provides the opportunity for some stability for the region’s most vulnerable people. The resources, markets, and technical knowhow and experience of the Caribbean population already exists, it is just being underutilized. Additionally, governments must be stronger when dealing with the tourist industry and mandate that they must buy local first, then secure imports after. By supporting the agricultural sector, it will free up a great deal of revenue for health and education projects which are currently used up on food imports.

Furthermore, regional and national banks must offer credit to expand production and improve technology for small scale farmers. If the leaders simply continue to talk and do nothing to deepen regional integration, then Dr. Anthony’s warning of becoming a failed society will become reality. The real test will be to see which government takes the lead to make sure that this doesn’t happen—and whether others will do their part to implement the much needed reforms.
Posted by Kevin Edmonds at 9:39 PM