The Drug Trade and the Increasing Militarization of the Caribbean

The Drug Trade and the Increasing Militarization of the Caribbean 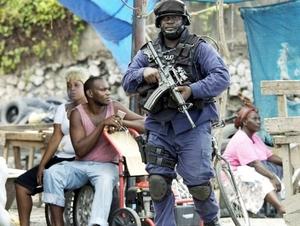 Given the current controversy surrounding the extent of the U.S. drone program and targeted killings, it is important to revisit that in the summer of 2012, the U.S. Customs and Border Protection Agency announced that unmanned drones would begin patrolling Caribbean airspace as an expansion of the Caribbean Basin Security Initiative (CBSI). This is only one aspect of how the War on Drugs in the Caribbean is increasingly looking like the War on Terror.

The U.S.–Caribbean border is the often ignored “Third Border,” which the Department of Homeland Security has referred to as an “open door for drug traffickers and terrorists.” A recent study by the National Defence University has stated that “the region's nexus to the United States uniquely positions it in the proximate U.S. geopolitical and strategic sphere. Thus, there is an incentive, if not an urgency, for the United States to proactively pursue security capacity-building measures in the Caribbean region.”

While the drones are unarmed for the time being, they will be primarily used to locate drug traffickers operating fishing boats, fast boats, and semi-submarines and would relay information to the Coast Guard, Navy or Caribbean authorities to carry out the interception and arrests. It has been revealed that the drones will be operating out of bases in Corpus Christi, Texas, Cocoa Beach, Florida and potentially the Dominican Republic and Puerto Rico.

The shift towards the use of drones in the region is largely based off of an unconvincing pilot program carried out over 18 months in the Bahamas, in which “During more than 1,260 hours in the air off the southeastern coast of Florida, the Guardian (drones) assisted in only a handful of large-scale busts.” That said, the Caribbean governments increased militarization in the region when they implemented the never-ending War on Drugs without any public consultation or debate. This erosion of regional sovereignty may be a slippery slope to a dangerous future in which Caribbean nationals may very well find themselves on kill lists instead of facing a trial.

Such a conclusion is not baseless, as a November 2012 report by the U.S. House Committee on Homeland Security recommended that Latin American drug cartels be classified as terrorist organizations “so there is increased ability to counter their threat to national security.” Furthermore, in 2009, the U.S. Military drew criticism for placing 50 suspected Afghani drug traffickers on a “kill list” as part of their ongoing efforts to cut off finance stream of the Taliban. The controversy arose due to the fact that drug traffickers (generally classified as civilians) had now been placed into the same legal category as the Taliban “insurgents” and thus became legitimate targets.

This is especially important in light of how the extradition of Jamaican kingpin Christopher “Dudus” Coke was handled. In September 2009, the United States requested his extradition to face drug trafficking charges, but Jamaican Prime Minister Bruce Golding blocked the request due to his deep political connections with Coke. It was only after months of intense pressure that Golding caved in May 2010. Jamaican Police and the Jamaican Defense Forces led the bloody operation to arrest Coke, which resulted in the deaths of more than 70 civilians—the vast majority of which were unarmed.

The resulting scandal led to the downfall of Golding as Prime Minister but highlighted the power that drug traffickers and gang leaders have had in Jamaican government and politics. It has since been reinforced that the operation was “assisted by the U.S. government and carried out, to a large degree, at its behest.” Information has emerged which reveals that a U.S. spy plane participated in the raid of Coke’s stronghold of Tivoli Gardens, and a Freedom of Information Act action has recently been levied against the Drug Enforcement Agency (DEA) by a group of law students to reveal the extent of U.S. involvement.

To prevent such explosive outcomes in the future, there has been a call for closer integration between Caribbean police forces and the U.S. DEA in a clear escalation of the War on Drugs. A September 2012 Senate Report revealed that Jamaica has been floated as a target for a Sensitive Investigative Unit, which consists of a highly trained police that collaborate with the DEA. A similar program exists in Kandahar, where U.S. and British troops have created and participated in a task force made up of Afghan police officers and U.S. DEA agents to disrupt the drug trade and investigate corrupt Afghan officials.

According to a seemingly benign Department of Homeland Security (DHS) press release announcing the drone program, the “DHS is partnering with Caribbean nations to enhance border security in the region through the Caribbean Basin Security Initiative (CBSI) . . . . The DHS is conducting border security training in conjunction with CBSI to increase partner nation capacity to secure their borders.” The problem with such statements is that there is always more shady business going on behind the scenes. Given the direction of U.S. policy in the region, it will only be a matter of time until the War on Drugs becomes eerily similar to the War on Terror.

It is impossible to argue against the protection of the Caribbean people against the ravages of the drug trade—concrete steps must be taken to combat it. However, the militarization of the region should not be considered the only way to move forward. Preventative programs to tackle youth crime and general unemployment must be instituted and supported by Caribbean governments and their international partners. Despite what the previously mentioned National Defence University thinks about the militarization of the Caribbean, such actions are not preventative, but reactionary and ultimately futile. Like anywhere else, it is the overall lack of opportunity which creates foot soldiers for the drug trade. The determination to create a real alternative is what is needed—not the deployment of more drones or more special police task forces.
Posted by Kevin Edmonds at 1:13 PM