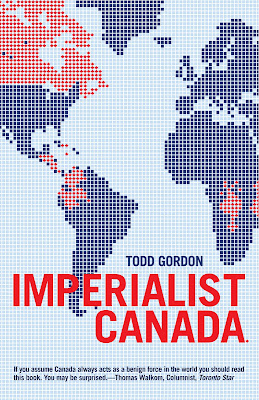 Most Canadians tend to view our country as a force for good in the world — we have even been subjected to beer commercials trying to convince us that we are a nation of peacekeepers, not soldiers.

This story would also have us believe that Canada was settled through a process of fair negotiation with Canada’s many indigenous peoples, and is a beacon of enlightened foreign policy and multicultural toleration when compared to our overly aggressive southern neighbour.

Todd Gordon’s book Imperialist Canada not only turns this misconception on its head, but shatters it with a sledgehammer of inconvenient but necessary truths about how the relative comfort and security we currently enjoy has come at the continued expense of indigenous peoples at home, and our oppression and exploitation of other peoples across the developing world.

A book that Gordon admits is long overdue, Imperialist Canada deals with the legacy and continuation of racist practices, stereotypes and ideologies — topics which do not make the evening news, but should.

From Canada’s decade-long war in Afghanistan to the overthrow of a democratically elected government in Haiti in 2004, to our government’s support for an illegitimate pro-business regime in Honduras, our country’s hands are far from clean, and our national consciousness is anything but enlightened.

The book is written in an engaging and straightforward manner, with Gordon seamlessly incorporating theory, history and current events into a highly readable and accessible book. Doubters of Canada’s role as an imperial power will unfortunately be met with a host of references which reinforce Gordon’s point.

Imperialist Canada gives the reader an important context to understand the current conflict in Northern Ontario, where the Kitchenuhmaykoosib Inninuwug First Nation are fighting mining companies from excavating their sacred burial grounds and contaminating their drinking water. This is not an isolated incident, but rather part of a tragic pattern that extends to Canadian mining corporations undermining indigenous peoples across the Americas, Africa, and Asia.

Stephen Harper’s statement that, “We also have no history of colonialism. So we have all of the things that many people admire about the great powers but none of the things that threaten or bother them” is revealed as a dangerous lie.

Canada’s announcement earlier this year to open military bases in Jamaica, South Korea, Senegal, Kenya, Kuwait and Singapore is a sign of a more militant and aggressive Canada with imperial ambitions — a further confirmation of the book’s premise.

Todd Gordon skilfully succeeds in “encouraging people to rethink Canada’s role in the world.” For that, this book is highly recommended for all engaged in the struggle for social justice across Canada and beyond.

Imperialist Canada importantly points out that being the lesser of two evils in comparison to the United States is not a position Canadians should be proud of — being a lesser evil is still a far cry from being a force for good in the world. We can, and should, work toward ending our exploitation and oppression of indigenous peoples at home and other peoples abroad.